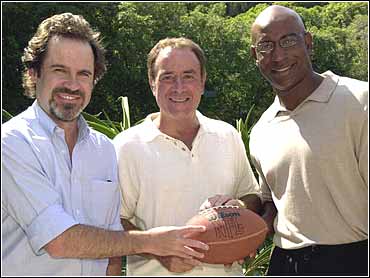 What's next, Chris Rock at the British Open?

In an attempt to reverse sliding ratings, ABC Sports has brought Dennis Miller aboard as part of a drastic reworking of its Monday Night Football broadcast team.

Yes, THAT Dennis Miller -- once a regular on Saturday Night Live and host of his own HBO comedy show. The Dennis Miller known for his sarcastic rantings and obscure references.

Miller's "role will not be to do Xs-and-Os, nor will it be to do stand-up comedy," Don Ohlmeyer, the show's producer, said Thursday. "Our goal was to try and put together a team that has distinctive voices, distinctive personalities, distinctive points of view."

Miller insisted he would not try to dominate the air time.

The three will start working together next week, Ohlmeyer said, and the show returns to the air Sept. 4.

Eric Dickerson, like Fouts a member of the Pro Football Hall of Fame, and ESPN's Melissa Stark join the show as sideline reporters, replacing Lesley Visser.

Housecleaning at Monday Night Football began in March, when color analyst Boomer Esiason was fired after two seasons, and Ohlmeyer, the show's producer in the 1970s, was brought back.

Ohlmeyer, who hand-picked the new crew, had vowed to get viewers talking about the show the way they did when Howard Cosell and Don Meredith were on ABC's NFL team.

Miller's selection might do just that at the risk of alienating viewers who prefer their football announcers to have a background in the game.

"We want a telecast that's relevant, successful and unpredictable," Ohlmeyer said. "If it doesn't work out, no amount of buzz will save us."

The Nielsen ratings for Monday Night Football have decreased each of the past five seasons, from an average of 17.8 with a booth of Michaels, Dan Dierdorf and Frank Gifford in 1994, to last season's record low of 13.7 with Michaels and Esiason. A rating point represents 1 percent of U.S. TV homes.

About 20 people were in contention for each of the new spots in the booth, and auditioned by "calling" a tape of last year's AFC playoff game between Buffalo and Tennessee with Michaels.

Bombastic talk show host Rush Limbaugh was "seriously considered," Ohlmeyer said, adding, "I'm hopeful that Rush will do some appearances for the show in some capacity."

By HOWARD FENDRICH
© 2000, The Associated Press. All Rights Reserved. This material may not be published, broadcast, rewritten, or redistributed