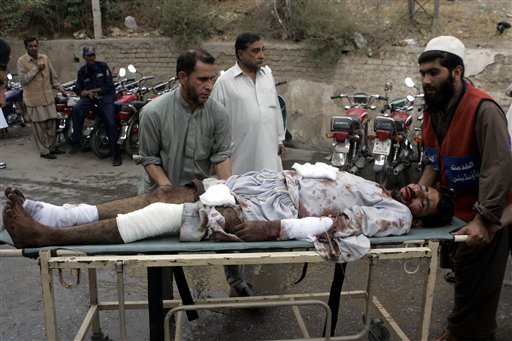 "I don't think that this will bring us to a better atmosphere," said Israeli Foreign Minister Silvan Shalom.

Also Thursday, the Israeli military said it intercepted a suspicious vessel in the Mediterranean, west of its port city of Haifa. Military sources said Israel captured a senior operative of the Lebanese guerrilla group Hezbollah. The man is an explosives expert, the sources said. They said the boat held 36 CD-ROM disks with instructions on how to assemble bomb belts for suicide bombers.

Abbas is also weighing a U.S. proposal that he meet with President Bush in Qatar, a Palestinian official said, speaking on condition of anonymity.

U.S. administration officials have said Mr. Bush might visit the Mideast at the end of a European trip next month, with possible stops in the Gulf states of Kuwait or Qatar, countries that supported the United States during the Iraq war.

Last year, Israel intercepted a ship, the Karine A, carrying 50 tons of banned weapons through the Red Sea, reportedly destined for the Palestinian Authority.

In new violence, six Palestinian children, ranging in age from 9 to 14, were wounded by army fire after throwing stones at Israeli tanks in the West Bank and Gaza Strip, Palestinian doctors said. A 14-year-old boy was in critical condition.

A U.S.-backed plan, the so-called "road map" to Mideast peace, calls for ending violence immediately and setting up a Palestinian state by 2005. In the first of plan's three phases, Palestinian security forces would rein in militias that have carried out scores of shootings and bombings in the past 32 months of fighting, while Israel would withdraw from Palestinian towns and freeze construction in Jewish settlements.

The Palestinians have accepted the plan, while Israeli Prime Minister Ariel Sharon has expressed major reservations, insisting among other things that the Palestinians crack down on militants before Israel makes a move. Sharon has said he would not give a formal response on the road map until he has discussed his reservations with President Bush.

With terrorism skyrocketing, Israeli analyst Gerald Steinberg warned Mr. Bush may step back from the roadmap.

"The view both from here and from there is probably that as long as Arafat is still playing a major role, the conditions of the President's June 24 speech last year have not been met; the road map was released prematurely."

And the plan could suffer a premature death.

With Egypt's help, Abbas has been trying to persuade Hamas and Islamic Jihad to accept a so-called "hudna," a one-year suspension of attacks. Previous truce talks in Cairo have failed, and Egypt told Palestinian officials this week it would not renew mediation efforts until Israel has accepted the road map.

Sharon told Abbas in their weekend summit that a suspension of attacks was insufficient. Sharon insisted that Palestinians disarm the militias and arrest their leaders, saying a mere suspension of violence would allow the militants — weakened by Israeli military strikes — to regroup and plan more attacks.

Abbas told Sharon, according to minutes of the four-hour meeting viewed by The Associated Press, that "the cease-fire will just be the beginning, it will not be the end."

Abbas also said he considered the "weapons chaos" in the Palestinian areas unacceptable, suggesting he would disarm militias at some point.

In the West Bank village of Al Yamoun, a 14-year-old boy was critically wounded by army fire in similar circumstances, doctors said.