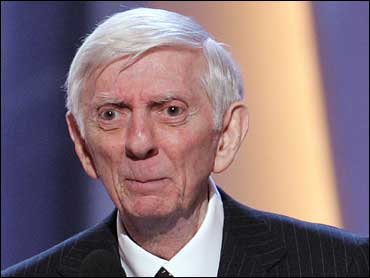 Aaron Spelling, a onetime movie bit player who turned to television production to create a massive number of hit series from the vintage "Charlie's Angels," "Dynasty," "Love Boat" and "Fantasy Island" to "Beverly Hills 90210" and "Melrose Place," has died, his publicist said. He was 83.

Spelling died Friday at his home in Los Angeles after suffering a stroke on June 18, according to publicist Kevin Sasaki.

Spelling's other hit series included "Burke's Law," "The Mod Squad," "Starsky and Hutch," "T.J. Hooker," "Matt Houston," "Hart to Hart" and "Hotel." He kept his hand in 21st-century TV with series including "7th Heaven" and "Summerland."

He also produced more than 140 television movies. Among the most notable: "Death Sentence" (1974), Nick Nolte's first starring role; "The Boy in the Plastic Bubble" (1976), John Travolta's first dramatic role, as a boy born without immunities whose life is spent in isolation; "The Best Little Girl in the World" (1981), which starred Jennifer Jason Leigh as a teenage anorexic.

During the 1970s and 1980s, Spelling provided series and movies exclusively for ABC and is credited for the network's rise to major status. Jokesters referred to it as "The Aaron Broadcasting Company."

Success was not without its thorns. TV critics denounced Spelling for fostering fluff and nighttime soap operas. He called his shows "mind candy"; critics referred to them as "mindless candy."

"The knocks by the critics bother you," he admitted in a 1986 interview with The Associated Press.

"But you have a choice of proving yourself to 300 critics or 30 million fans. You have to make a choice. I think you're also categorized by the critics. If you do something good they almost don't want to like it."

He liked to cite some of his more creditable achievements, like "Family" (1976-80), a drama about a middle-class family, and "The Best Little Girl in the World."

Among his prestige films for TV: "Day One" (1988), about an atomic blast in middle America; "And the Band Played On" (1992), based on Randy Shilts' book about the AIDS crisis.

Spelling had arrived in Hollywood virtually penniless in the early 1950s. By the 1980s, Forbes magazine estimated his wealth at $300 million. He enjoyed his status, working in a Hollywood office larger than those of golden-era moguls ("I'm slightly claustrophpobic," he explained.) He gifted his second wife, Candy, with a 40-carat diamond ring.

The Spellings' most publicized extravagance was their 56,500-square-foot French chateau in Holmby Hills.

The couple bought the former Bing Crosby estate for $10 million. It was leveled to the ground, along with two other houses. Construction cost was estimated at $12 million.

The two-story house reached a height of 51 feet (15 meters). Anmong the features: an entire floor for closets, a one-lane bowling alley, plus the usual elements for the Hollywood rich - pool, tennis court, gym, screening room. Built on rollers, it easily survived the 1994 Northridge earthquake.

The mansion dwarfed nearby estates, and the neighbors were furious. One woman won an injunction during construction, calling the place "Look-at-me-I'm-rich architecture."

Spelling grew up in a small frame house on Browder Street in Dallas "on the wrong side of the tracks," he wrote in his 1996 autobiography. He was the fourth son of immigrant Jews, his father from Poland, mother from Russia. The father's name, Spurling, was simplified to Spelling by an Ellis Island official.

Spelling enlisted in the Army Air Corps after graduating from high school in 1942.

"I grew up thinking 'Jew boy' was one word," the producer wrote in his memoir, "Aaron Spelling: A Prime-Time Life." He was considered strange by his Dallas schoolmates because his parents spoke Yiddish. He was subjected to anti-Semitic taunts and beatings on his way home from school.

At 8, the boy suffered what he termed a nervous breakdown, and he spent a year in bed. He later considered that period the birth of his creative urge. He fell in love with great storytellers, especially O. Henry. Of his early TV series he said, "They are all O. Henry short stories."

"I still have nightmares about being in a $6,000 house in Dallas, Texas," he remarked in a 1996 AP interview. "Wall-to-wall people, one bathroom. I was the one to go to the local bakery a block away on Saturday to get the day-old stuff."

After combat and organizing entertainment in Europe during the war, Spelling returned to Texas and enrolled at Southern Methodist University, where he wrote and directed plays. He continued working in local theatrics after graduating.

Finding no work in New York, Spelling moved to Los Angeles, where he staged plays and acted in more than 40 TV shows and 12 movies. His skinny frame suited him for the role of a ragged beggar in the MGM musical "Kismet." He worked for three weeks, repeating his one line: "Alms for the love of Allah."

The "Kismet" experience resulted in two decisions: he abandoned acting for the typewriter; he married a young actress he had been courting, Carolyn Jones. She became well-known, especially as Morticia in "The Addams Family" series. They divorced after 13 years, and she died of cancer in 1983.

Spelling's friendship with such actor-producers as Dick Powell, Jack Webb and Alan Ladd led to his rapid rise as a prolific writer and later producer of TV series. In 1960, Powell, head of Four Star Productions, hired him to produce shows for Powell himself, his wife June Allyson and Lloyd Bridges. "Burke's Law," with Gene Barry as a millionaire detective, became the first hit series Spelling created.

After Powell's death, Spelling teamed with Danny Thomas in a production company, scoring a huge success with "The Mod Squad," about a trio of youthful undercover cops. In 1969, Spelling began an exclusive contract with ABC, helping the network to rise from a low third place to the top of the network ratings. Former ABC programming chief Leonard Goldberg joined him as partner in 1972.

After ABC cancelled "Dynasty" in 1989 and his contract with the network had ended, Spelling found himself without a show on the air for the first time since 1960.

"I was so depressed, I would have quit, but I like TV too much," Spelling wrote in his memoir. Besides, his company had started issuing stock in 1986, and he had an obligation to his investors. After a year's respite, he returned with "Beverly Hills 90210," which helped launch the fledgling Fox Network into the bigtime. "Melrose Place" gave Fox another hit.

Throughout his career, Spelling maintained the same image: the skinny frame, slightly hawkish face. He usually posed with a pipe in his mouth, a custom he adopted early after seeing stars with pipes in fan magazine photos.

Spelling and his second wife, Candy, had two children, Tori (for Victoria), who became a star on the two Fox serials ("Now I'm known as Tori Spelling's father," he said in mock lament), and Randy, who appeared in the short-lived "Malibu Shores."