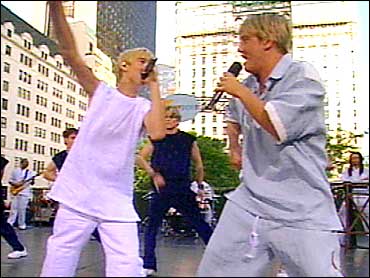 This summer The Early Show Plaza is coming alive with some great concerts. Friday, May 31, brothers Aaron and Nick Carter performed a duet they recorded on Aaron's current "Oh Aaron" CD called "Not Too Young, Not Too Old," live outside on The Early Show plaza.

Teen pop star Aaron Carter has joined forces with his Backstreet Boy big brother Nick in three upcoming concert events. Starting this weekend, the brothers will perform together, singing some of the many songs they've collaborated on over the years.

Aaron, who is 14, is currently out promoting his CD "Oh Aaron." He recently completed a 20-city tour in support of that platinum selling album. His brother Nick collaborated with him on the project. Aaron goes into the studio to begin work on his third album later this summer.

Aaron says he and Nick love working together and plan to continue to do so in the future.

"He's my little brother, you know, and I like to be involved in anything he does, whether it's big or small," says Nick on The Early Show.

Aaron says he was only 3 or 4 when his older brother hut it big in the Back Street Boys so "I know the Backstreet Boys better than anyone."

Nick, 22, is just releasing his solo album but says he will continue with BSB. "They support me and I support them."

Nick is the youngest member of the pop sensation the Backstreet Boys. Nick, alongside Brian Littrell, AJ McClean, Kevin Richardson and Howie Dorough has helped pave the path for pop bands today.

Their first record release, "Backstreet's Back" turned them into almost overnight sensations in both Europe and the U.S.

The release of "Millennium" pushed the band even higher on the charts entering the Billboard Top 200 at number one and selling over 1.1 million albums in its first week alone.

The album reached five time platinum sales in the U.S.

According to Nick, the Backstreet Boys aren't done yet. Hits from their latest release "Black and Blue" continue to work their way up the charts throughout the world.

In February of this year, Nick and Aaron performed together for the first time during a pay-per-view Valentine's Special called "Aaron Carter's Valentine's Party."

Aaron received his big break at a 1997 Backstreet Boys concert in Berlin, Germany. He opened for his brother's group and reportedly stole the show.

Aaron says he's always been interested in music, but probably wouldn't have pursued it seriously if his brother Nick hadn't been in the business. In fact, he says Nick was the first person to actually ask him if perhaps he too wanted to sing.

Aaron's musical caeer actually began when he was seven, when he landed the position of lead singer in a band called Dead End. Since then he set the world record for the most hit songs recorded by a person his age in music history.

Aaron is now working on a new album, which he says will be out in the fall and is currently in talks to make his movie debut in a tentatively titled film called "Dudes."

Aside from his brother Nick, Aaron has a twin sister named Angel and sisters Bobbie Jean and Leslie.