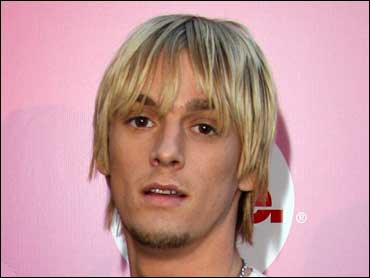 The ShowBuzz's Judy Faber researched and wrote this story.

Singer and actor Aaron Carter is fine after being hospitalized earlier this week, his spokeswoman Juliette Harris tells ShowBuzz. Carter had "a minor surfing accident" in San Diego and is "recovering nicely at home" in Los Angeles.

Carter and his siblings are set to star in the upcoming reality show "House of Carters" on E! this October.

In the weekly series, Aaron, his big brother Nick, and their three sisters move in together and try to become a family again.

The Carters' legal battles have been tabloid fodder for years. Their parent's contentious divorce, Nick's arrest for driving under the influence, Bobbie Jean's arrest for assault and Aaron's petition for legal emancipation from his manager/mother (a petition he later withdrew) are just some of the stories that have made headlines.

2Aaron has also earned plenty of tabloid ink with his love life. He dated both Lindsay Lohan and Hilary Duff, sparking rumors of a feud between the two teen starlets.

Musically, Aaron is best known as a heartthrob for the 12-and-under set who sold more than 1.5 million copies of his 2000 album "Aaron's Party." His challenge now is reviving his music career as a young adult.