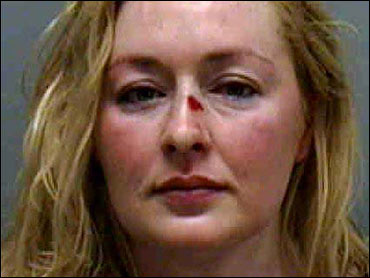 Country singer Mindy McCready was sentenced Friday to a year in prison after she violated probation on a 2004 drug charge by getting charged in a domestic dispute in Florida.

The singer has been in jail in Tennessee since July, when she returned to Nashville after being accused of scratching her mother in a scuffle and resisting sheriff's deputies in her hometown of Fort Myers.

McCready, who has several legal problems in recent years, had received a three-year suspended sentence in 2004 after illegally obtaining painkillers with a false prescription.

The singer sobbed as she asked for leniency from Circuit Judge Jeff Bivins.

"Your honor, I can honestly tell you this: This has been the longest two months of my life ... not being able to hold my son ... has been excruciatingly painful."

"I could only say I'm sorry," she said. "Please give me a chance to make things as right as they can possibly be."

Bivins sentenced her to a year in the county jail with credit for 75 days of time served. After her release she will face another two years of probation.

Deputy District Attorney General Derek Smith said McCready violated probation in three ways: by being charged in a new offense; not reporting those charges immediately to her probation officer; and by the nature of the new assault charges.

McCready had a hit in 1996 with "Guys Do It All the Time," but has struggled with legal and personal problems that included a beating by her then-boyfriend and suicide attempts. She gave birth to her son in 2006.

Still pending is a charge of violating her probation for driving on a suspended license in 2006. She pleaded guilty to the driving charge, but her attorney has since sought to withdraw the plea, citing new evidence.

President Biden criticized the governors of Texas and Mississippi after they lifted their states’ mask mandates and other coronavirus restrictions. Health experts are warning "now is not the time" to ease restrictions as new variants continue to spread. Dr. Amesh Adalja, an infectious disease expert and senior scholar at Johns Hopkins University's Bloomberg School of Public Health, joined CBSN to discuss the latest.