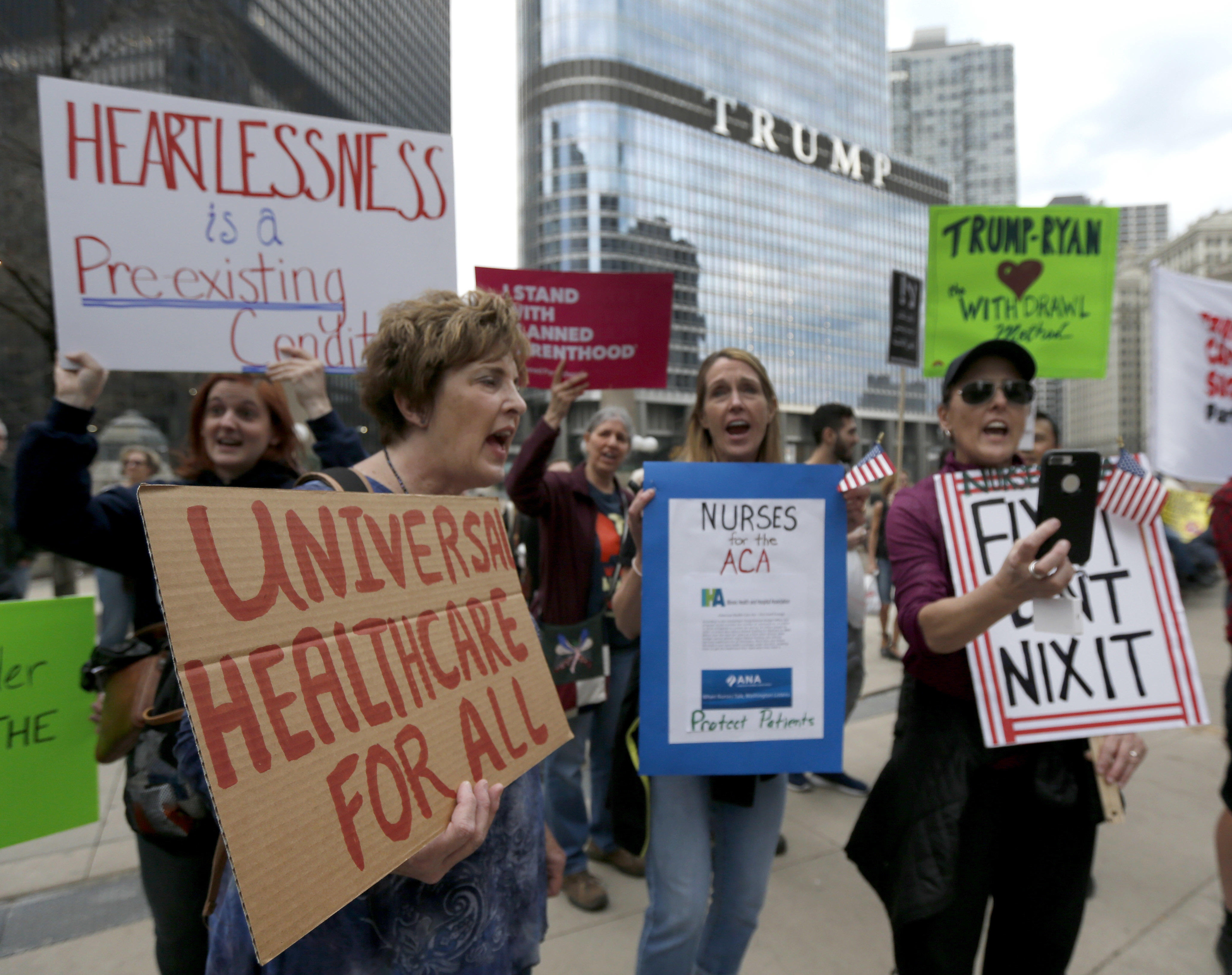 Now, Democrats are trying to make good on their taunts. They're trying to use the vote as campaign weapon, hammering Republicans for voting to replace a popular statute with a bill Congress' own budget experts said would have driven up premiums and the ranks of the uninsured.

They're already using it in ads from Georgia to Arizona and planning others in their drive to win House control in this November's elections — often coupling it with December's tax cuts, which disproportionately benefited businesses and wealthy Americans.

"They walked the plank on a disastrous economic agenda," said Charlie Kelly, executive director of the House Majority PAC, which backs Democratic candidates. He said the votes underscore a narrative of: "Wait a minute, these guys are absolutely not standing with working families. They're trying to screw me on my health care."

Republican strategists offer mixed views on the issue's impact, with the most optimistic hoping to damage Democrats by accusing them of favoring government-financed health care. About a third of Senate Democrats and two-thirds of House Democrats have backed such legislation, a favorite with the party's most liberal voters, which Republicans say will prompt government decision-making about care and tax increases to finance the proposal's huge costs.

"A bigger government is not something they want to run on," GOP pollster Jon McHenry said of Democrats.

That's not stopping Democrats from featuring health care in the campaign's earliest ads.

In Arkansas, cancer survivor Clarke Tucker says he'll "stand up to anyone who tries to take your health insurance" as he competes for the Democratic nomination for a seat surrounding Little Rock.

"Health care is on their mind every day, and I understand that," Tucker said of area voters in an interview.

Democrats are also using the issue in their battle for the Senate, where Republican proposals to scrap Obama's law flopped last summer, dooming the effort.

In Arizona, Democratic Senate hopeful Rep. Kyrsten Sinema is highlighting her family's loss of health insurance when she was a child, saying, "I know what it's like for a family to struggle to make ends meet."

The Democratic charge on health care represents a turnaround from recent elections. In 2010, just months after passage of the Affordable Care Act, Democrats lost control of the House as Republicans tapped into fears about the government's growing role in health care. Four years later, Republicans grabbed Senate control following the botched rollout of the health law's online insurance markets and some people's loss of policies that fell short of the statute's coverage requirements.

"Voters are very upset with the actions Republicans took" trying to repeal Obama's law, said Sen. Chris Van Hollen, D-Md., who heads Senate Democrats' campaign committee. "This is an issue that we're seeing at the top of voters' minds, and this is across all states."

Even some Republicans concede the issue will be a tough one.

Pennsylvania Rep. Charlie Dent, among only 20 Republicans who voted against the House repeal bill, said GOP candidates will be vulnerable because of the bill's impact and because President Donald Trump privately labeled the GOP measure "mean" a month after it passed.

"That ad more or less writes itself," Dent said of the inevitable Democratic campaign spots.

Former Rep. Tom Davis, R-Va., who once headed the House GOP's campaign organization, said Republicans "would have owned" health care and steadily growing insurance premiums had they successfully enacted legislation. Instead, he says, "They may or may not own the outcomes," adding, "I don't think it's a silver bullet for Democrats."

Democrats say they've gotten further ammunition from subsequent GOP actions. These include Mr. Trump's halt of federal subsidies that helped insurers contain some costs and his easing of restrictions on short-term insurance plans with low costs but skimpy coverage.

Last May, the nonpartisan Congressional Budget Office estimated that the House-passed bill would have left 23 million additional people uninsured by 2026 and boosted premiums an average 20 percent this year.

Marking the vote's anniversary, progressive groups planned more than a dozen rallies Friday from California to Virginia. The liberal Save My Care was airing a 30-second television ad in Washington, D.C., showing top Republicans celebrating the House vote with Mr. Trump in the White House Rose Garden. "We won't forget" appears on a black screen after newscasters intone the bill's impact, including letting insurers charge higher prices for people with pre-existing medical conditions.