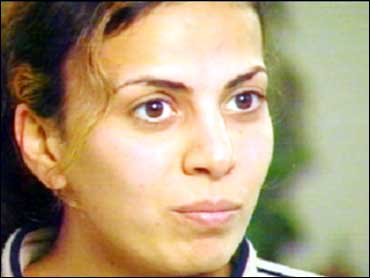 On the surface Shifa Adnan Kodsi had a lot to live for: young and attractive, she worked in a beauty parlor and had a seven-year-old daughter. But when Israel invaded the West Bank, this young woman decided she had to act.

No matter the cost to her family and daughter, CBS News Correspondent Elizabeth Palmer reports Kodsi's answer was to become a suicide bomber.

"The idea occurred to me a week ago when I saw the massacres which were occurring - on television - the massacres in Ramallah," she said through a translator in this exclusive interview with CBS News.

Kodsi was arrested Wednesday at her parents' house in the West Bank after a tipoff to Israeli intelligence forces. She won't admit any affiliation to any radical Palestinian organization, but does say she reveres Yasser Arafat.

"I did it for him," she explained. "Because of the humiliation and embarrassment that he was exposed to even though he is a head of state."

Although Arafat claims he has fulfilled Israeli and Western demands to denounce suicide bombings, it's not a message that ever reached Kodsi. She said, "If he ever did make such a request we would think of stopping...because after all he is our president and he is our leader."

Although she is obviously proud of her daughter, Kodsi believed her martyrdom in the name of Palestinian revenge was more important than her responsibility as a mother.

"She is not the first nor the last to be an orphan. Lots of other children have lost both mother and father."

According to Kodsi, the Israeli invasion of the West Bank left her very few choices.

Having witnessed so much random killing she desperately believed that becoming a suicide bomber -- as a political act -- would at least give her own death some meaning.

Her message for the parents of today's suicide bomber? "I congratulate them 1,000 times."