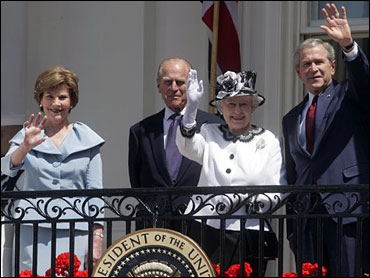 With trumpet fanfare and a 21-gun salute, President Bush welcomed Queen Elizabeth II to the White House on Monday as thousands of invited guests crowded the South Lawn for a glimpse of the British monarch.

The audience laughed aloud at a verbal slip by Mr. Bush when he said the queen had dined with 10 U.S. presidents and had helped the United States "celebrate its bicentennial in 17 ... ." Mr. Bush caught himself and corrected the date to 1976."

Mr. Bush joked that the queen just "gave me a look that only a mother could give a child."

In his remarks, Mr. Bush said the United States and Britain, allies in Iraq and Afghanistan, were standing together in the war against terrorism.

"Our work has been hard," the president said. "The fruits of our work have been difficult for many to see. Yet our work remains the surest path to peace. Your majesty, I appreciate your leadership during these times of danger and decision."

The queen's grandson Prince Harry, now an officer in the British Army, is about to be deployed to Iraq. But queens don't do politics; they do diplomatic niceties, reports CBS News correspondent Mark Phillips.

"I know a lot of people both sides of the Atlantic would love it if she said, 'look my grandson is in danger – like a whole bunch of other young men – of losing his life, but that's not the kind of thing she ever says," says British political columnist Simon Hoggart.

The queen noted that it was her fifth visit to the United States. "It is a moment to take stock of our present friendship, rightly taking pleasure from its strengths while never taking these for granted," she said.

"And it is the time to look forward, jointly renewing our commitment to a more prosperous, safer and freer world," she added.

Mr. Bush and his wife, Laura, were waiting on the driveway on a near-perfect spring day as the queen and her husband, Prince Philip, arrived by limousine. The two couples briefly shook hands before moving on to the formal welcome.

A brilliant blue sky framed the colorful ceremony where red, white and blue bunting was draped over the fence lines on the South Lawn. The United States Air Force Band led a grand military procession onto the lawn.

The ceremony included a parade by the Old Guard Fife and Drum Corps dressed in black tricorner hats, white wigs, waistcoats, colonial coveralls, and red regimental coats. Their uniforms are patterned after those worn by the musicians of Gen. George Washington's Continental Army.

It was a day of high pomp and pageantry from a president known for his informality. It also was an uplifting event for a White House at a time when Bush's approval rate has dropped near all-time lows and he battles a Democratic Congress over funding for an unpopular Iraq war.

In honor of the queen, Mr. Bush agreed to host the first white-tie dinner of his presidency, with entertainment by violin virtuoso Itzhak Perlman.

"We did sort of have to convince him a little bit" to opt for the white-tie dinner, Mrs. Bush said of her and Secretary of State Condoleezza Rice's efforts to talk Bush into hosting the most formal dinner the White House can offer.

On Monday night, 134 guests will return in white tie and tails for the state dinner among 13 damask-clothed tables set with gold-trimmed ivory china and gilded silver candelabras.

"We had the opportunity to be here the last time she was here for a state dinner (hosted by the first President Bush in 1991) ... and we're so thrilled to have the chance to host her and to show her the strong affection the American people have for the British," she said.

For the first time in the Bush administration, a full, formal, white-tie reception is being held, reports Phillips. This is the top level of diplomatic formality, from an administration known more for Texas twang than tails. The full treatment is being explained as a way of underlining the closeness of the U.S.-British relationship.

"I think the purpose of the white tie dinner is to reciprocate for the queen's white tie dinner that she hosted for the president and Mrs. Bush in 2003 at Buckingham Palace," former White House social secretary, Lea Berman, said on The Early Show Monday.

It will be the Bushes' fifth state dinner in six years. The White House said the president was happy to return hospitality to the queen, who hosted the Bushes at a white-tie state banquet in November 2003 during an official visit to Britain.

Compiling the guest list for an event of this size takes a lot of care, said Berman.

"It takes a number of people, giving the president and Mrs. Bush input," Berman said. "But they will always have their own ideas about a state dinner list. And then they will take recommendations from the state department, from the NSC, from various parts of the White House, and this particular list is especially fun to put together because it's very social. And so I think you can expect to see lots of Bush friends."

According to Berman, every detail is planned out beforehand — right down to what people will be wearing.

"The members of the White House staff have been working with the queen's staff and the British embassy staff for months now on a variety of issues, and one of them would be to coordinate on clothing so that everyone is comfortable with what the expectations are, what's being worn, in the same way that they coordinate about dietary guidelines," Berman said. "They want to make certain that everything the queen and the Duke of Edinburgh would be served would be things that would be to their liking."

Berman said that she expects the queen will don a crown at the dinner.

The visit to Washington comes at the tail end of a six-day trip, the Queen's fifth to the United States in 50 years but her first since 1991, when Bush's father was president. The royal couple arrived Sunday night at Andrews Air Force Base before spending the night at Blair House, the president's guest house.

In between the White House events Monday, the royal couple plan to attend a garden party at the British ambassador's residence.

On Tuesday, the queen will join Laura Bush in a tour of Children's National Medical Center. She also plans to plant a tree at the British ambassador's residence and visit NASA's Goddard Space Flight Center and the National World War II Memorial. On Tuesday night she's to have dinner with the Bushes at the British Embassy before returning to London.

The royal couple kept a low profile Sunday, with no official events after attending the Kentucky Derby on Saturday. They began their six-day trip to the United States in Virginia. The queen addressed the state's General Assembly and visited Jamestown, which is observing the 400th anniversary of the founding of the first permanent English settlement in the Americas.