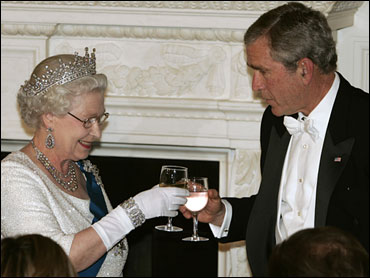 The centuries-old vermeil flatware and candelabras came from a London silversmith. A made-of-sugar replica of the queen's 1953 coronation rose graced the cake. English farmhouse cheeses accompanied the salad course.

And the traditional "special guest" invited only at the last minute was sure to be of interest to an avid horse enthusiast such as the queen: Calvin Borel, the jockey who rode Street Sense to victory in the Kentucky Derby this weekend with the royals in attendance.

"It's just like winning the Kentucky Derby — it might even be better," Borel said as he arrived for the dinner.

On the other hand, there was the president suggesting Queen Elizabeth was over 230 years old.

The president's slip of the tongue during morning welcoming speeches was inadvertent, of course, and quickly smoothed over with humor. But it was not exactly the flawless effort Bush had hoped would erase memories of the "talking hat" episode during the queen's last U.S. visit. (In 1991, during Bush's father's administration, a too-tall lectern left the audience able to see only the queen's hat behind microphones.)

The queen, a sprightly 81, gave an embarrassed Bush a gracious nod after he suggested she had celebrated the United States' founding in 1776. He meant to say she had attended 1976 bicentennial festivities.

"She gave me a look that only a mother could give a child," the president quipped, earning a reserved chuckle from his guest.

Laura Bush made her own minor calendar mistake. She flubbed the year that she and her husband attended the state dinner hosted by President George H.W. Bush in honor of the queen, saying it was in 1993.

The president and the queen took markedly different approaches to their formal remarks during a South Lawn arrival ceremony attended by thousands.

Bush focused on the partnership between the United States and Britain in Iraq and against terrorism. In just four minutes, he mentioned "freedom" and "liberty" seven times. "Your majesty, I appreciate your leadership during these times of danger and decision," he said.

By contrast, the queen said her fifth journey to the United States over 50 years was an occasion to "step back from our current preoccupations."

The queen's grandson Prince Harry, now an officer in the British Army, is about to be deployed to Iraq. But queens don't do politics; they do diplomatic niceties, reports CBS News correspondent Mark Phillips.

"I know a lot of people on both sides of the Atlantic would love it if she said, 'look my grandson is in danger – like a whole bunch of other young men – of losing his life, but that's not the kind of thing she ever says," says British political columnist Simon Hoggart

In the leaders' toasts at dinner, they took opposite tacks. Bush praised her for a reign that has "deepened our friendship and strengthened our alliance," while the British monarch talked of the threat of terror, problems like climate change and the likelihood of occasional disagreement between allies.

"Ours is a partnership always to be reckoned with in the defense of freedom and the spread of prosperity," she said.

"Her message was very clear," the queen's former press secretary, Dickie Arbiter, said on The Early Show Tuesday. "She was speaking on behalf of the British government in saying that, yes, we do have differences, we do talk about these differences, but we're still united."

Earlier gaffes aside, the day had the White House at its freshly painted best and inspired excitement inside and outside its gates.

Under lampposts adorned with the two countries' flags, throngs hoping for a rare glimpse of royalty lined Pennsylvania Avenue for much of the day. Hats of all shapes bobbed down downtown streets in unusually high numbers.

Mrs. Bush insisted at midday that the president was enthusiastic about wearing white tie and tails — though admittedly after being persuaded by his wife and secretary of state, Condoleezza Rice, to elevate the dinner to that exalted level in the first place.

"We thought if we ever were going to have a white-tie dinner, this was going to be it," Mrs. Bush said.

Presidential spokesman Tony Snow disputed any notion that the royal visit was a welcome break for a White House burdened by low approval ratings and acrimonious tussles with congressional Democrats over the Iraq war.

"There's a lot of other activity going on," he said tersely.

The queen and her husband, Prince Philip, were treated to a trumpet fanfare, a 21-gun salute and a parade by the Old Guard Fife and Drum Corps at a morning arrival ceremony attended by thousands of guests. From there, the Bushes and the royals repaired to a very exclusive lunch, with only the two countries' ambassadors and a few family members.

The leaders and their spouses then mingled briefly on the street with dozens of British and American schoolchildren. Bush, in the unusual position of playing second fiddle, followed while the queen accepted bouquets of flowers and signed autographs.

Surrounded by a full honor cordon, the first couple greeted the royals on the North Portico for the fifth state dinner of the Bush presidency. Mrs. Bush helped the queen from her car, and advance coordination kept the ladies' attire from clashing.

Mrs. Bush wore an aqua creation by Oscar de la Renta with rhinestones, silver beading and a bolero jacket, while the queen had a cream gown with a sparkling bodice, a blue sash, long white gloves and a diamond tiara.

"I think the purpose of the white tie dinner is to reciprocate for the queen's white tie dinner that she hosted for the president and Mrs. Bush in 2003 at Buckingham Palace," former White House social secretary, Lea Berman, said on The Early Show Monday.

Among the 134 guests in the State Dining Room decked out in white and gold were scores of diplomats, businessmen and members of Congress. Other than Indianapolis Colts quarterback Peyton Manning and golfer Arnold Palmer, the celebrity quotient was low.

A number of top Bush fundraisers made the cut. Some were so-called Rangers, who raised over $200,000 for Bush's 2004 re-election campaign, including automotive executive James Click, investor Brad Freeman and former Enron president Richard Kinder. Former Commerce Secretary Donald Evans, who ran Bush's campaign fundraising in 2000, was also in attendance.

Virtuoso Itzhak Perlman was playing violin after the meal.

But after all the excitement and hundreds of hours of preparation, Mrs. Bush suggested that this white-tie affair could not only be their first — but last. She called the dinner, somewhat wistfully, "the most elegant and most formal that we'll host."