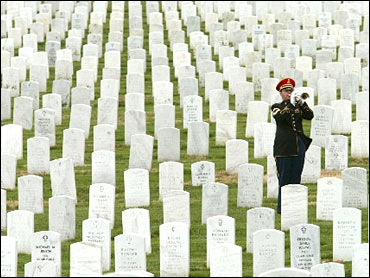 This column from The Nation was written by Robert Jay Lifton and Greg Mitchell.

Americans are struggling to come to terms with the devastation of Hurricane Katrina and with deaths that may ultimately number in the thousands. It is important that this near-apocalyptic disaster not eclipse the still-unfolding disaster of the war in Iraq, upon which Katrina may have an unforeseen influence.

At the heart of the matter is what we owe the dead. President Bush, referring recently to Americans killed in Iraq, said that "we owe them something" and must "finish the task that they gave their lives for." Finding himself in the middle of a national debate over the meaning we give to our war dead, he clings to the traditional response -- that our soldiers must not have died in vain, and that their deaths represent noble sacrifices on behalf of eternal principles. Now taking hold, however, is an alternative, critical meaning: that these deaths can be rendered significant only by acknowledging the futility of the war itself.

Americans are grappling with these contradictory meanings. But the war's terrible toll (nearly 2,000 US soldiers killed as of this writing, and Iraqi deaths estimated at more than 20,000), together with the increasing recognition that the war is unwinnable, are strengthening the alternative meaning.

Americans are survivors of the war on either of two levels: directly, as soldiers or family members of those killed, or remotely, as compatriots of the dead in a war that is also "ours."

Survivor meaning is very much an issue in the official Pentagon ban on photographing American corpses or their caskets, and in the refusal of the President and his cabinet members to attend military funerals. Blocking out the images of these deaths serves to glorify and ennoble the war.

The war has generated painful survivor emotions, including deep disillusionment. There is a widespread realization that the Bush Administration deceived the public in the rationale it gave for going to war, in its false documentation of nonexistent weapons of mass destruction and in its specious linking of Iraq to the al Qaeda attacks of 9/11.

From the beginning of recorded responses to war, there have always been expressions of alternative survivor meaning. Even Homeric visions of warrior honor and immortality contain an undertone of deep sadness and loss, with many voices questioning the justification for the pain and suffering on both sides. The alternative mission achieved a psychological and creative apogee in connection with World War I, which gave rise to a vast literature depicting the grotesque slaughter of trench warfare.

Vietnam veterans interviewed in the early 1970s identified more with World War I veterans than with those of World War II. The latter, often their fathers, had fought a "good war" -- one widely seen as necessary, which ended in clear victory -- and they were profoundly troubled by their sons' opposition to a war that was still in progress.

Antiwar Vietnam veterans performed brilliant survivor theater when they hurled their medals on the Capitol steps, literally in the faces of those who had awarded them. Nothing could have conveyed more compellingly a rejection of the traditional glorification of warrior exploits and of the war itself. They were joined and energized by thousands of Americans who, from a greater distance, had already embraced an alternative survivor mission.

Similarly passionate feelings about the meaning of the Iraq War have been expressed by families of the dead, soldiers themselves and veterans. Such sentiments have given rise to organized opposition to the war, as embodied by groups such as Military Families Speak Out, Iraq Veterans Against the War and now Cindy Sheehan's Gold Star Families for Peace.

President Bush, on August 25, tried to counter those feelings by insisting that the fallen take "their rightful place among the heroes of history" whose mission we must "complete."

But Sheehan's rejection of the President's explanations for her son's death released in a vast number of Americans a sense that what we really owe the dead is an end to the killing.

The nation is immersed, then, in a war over meaning. Feelings are visceral because they emanate from our relationship to the dead. With the war in Iraq, the alternative survivor mission is achieving such power that, translated into political and military policy, it could contribute greatly to ending the war. With Hurricane Katrina, there may be a parallel survivor meaning -- a recognition that many died as a result of the kind of governmental callousness toward human life displayed in Iraq. In that way, Katrina could also prod Americans toward a decisive rejection of the war.

Robert Jay Lifton is the author of "Superpower Syndrome: America's Apocalyptic Confrontation With the World" and "Home From the War: Learning From Vietnam Veterans." Greg Mitchell is editor of the newspaper trade publication Editor and Publisher and co-author, with Robert Jay Lifton, of "Hiroshima in America and Who Owns Death?"