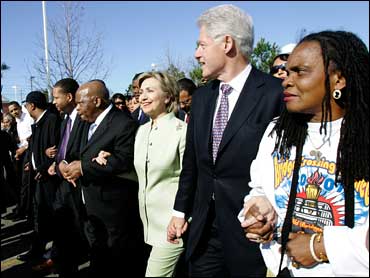 If you have ever been to Selma, Ala., it is impossible not to stop at the Edmond Pettus Bridge. You stop and think about what happened there 42 years ago: Police with billy clubs and dogs, and protestors, mostly African-American, peaceful and determined.

There was bloodshed and screaming, remarkable courage, and unleashed hatred. That bloody Sunday is a sacred day on the civil rights calendar. Cameras recorded that brutality, and America saw it all on the news that night.

Politicians like Hillary Clinton and Barack Obama should make the pilgrimage to Selma. It is important to walk with people like John Lewis and Joseph Lowery, people who really did talk the talk and walk the walk during the struggle for civil rights those many years ago.

To Clinton and Obama's credit, neither made the day into a face-off; each paid tribute to those who came before. What I kept thinking, though: Where are the rest of them? The candidates, I mean — and especially the Republicans.