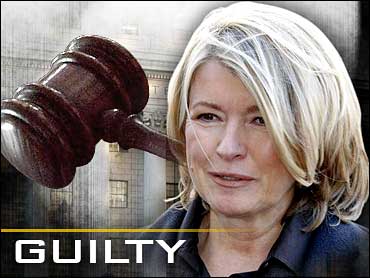 For these transgressions - the government calls them obstructing justice and making false statements and the jury agreed - Stewart almost certainly will spend some time in prison. She'll appeal her conviction, of course, but it's doubtful she'll win. It's also doubtful that she will have to serve anywhere near the maximum five year sentence per charge. Figure instead upon one year per charge and then go slightly up or down from there under the federal sentencing guidelines. There is no way U.S. District Judge Miriam Goldman Cedarbaum is going to throw the book at her when she gets the chance. But there is no way she can let her off with a minimal sentence. Stewart soon will have to direct her immense redecorating talents toward a tiny jail cell. Does chintz go well with cinderblock?

So she'll lose her liberty. Can you imagine being the folks who run the prison that has to accommodate Stewart? Can you imagine the time and effort that will have to go into ensuring her safety? Can you imagine how many convicts pose a greater threat to society than her? But it's more than that. Stewart also will lose her property. The fines imposed upon her are petty cash compared to her assets but the conviction also means that she'll no longer be able to formally control the company that bears her name: Martha Stewart Omnimedia Living, Inc. Like a crime boss, she'll be relegated to trying to run the "family business" from a jail cell, issuing furtive orders like Al Capone or John Gotti.

Stewart was convicted based upon the evidence of her best friend, Mariana Pasternak, and upon the testimony of an employee, Ann Armstrong, who is so loyal still to her boss that she broke down on the stand. She was convicted because jurors found it implausible that there was a reason for the sale of her Imclone stock other than the fact that she became aware on December 27, 2001, that Imclone's founder, Sam Waksal, was desparately trying to sell his. She was convicted because the jury believed that her story changed over time in a way that was more than suspicious. She was convicted because her co-defendant's witnesses were terrible and because her attorney, Robert Morvillo, chose not to put on much of a case at all. Morvillo, whose summation was masterful, now must answer the obvious questions: Why didn't he put Stewart on the stand? And why did he put one only one defense witness whose unimpressive testimony lasted less than one half hour? He wanted to show jurors that the case against his client was weak; instead he showed jurors nothing.

Stewart was convicted despite the fact that her defense team employed jury consultants who relied upon focus groups. She was convicted despite the lack of direct evidence against her. She was convicted despite the fact that the circumstantial evidence was capable of creating competing inferences and therefore reasonable doubt. For example, just because Stewart was told about Waksal's interest in selling his shares on December 27, 2001 doesn't mean that she and Bacanovic didn't have a pre-existed plan to sell them. And just because the stories that Stewart and Bacanovic gave investigators didn't exactly mesh on all levels doesn't mean they were lying. The jury convicted the defendants of a conspiracy that in substance and in process never really clicked.

Does all this mean that Stewart is innocent? No. Both her actions and her inaction generated an impression of culpability that eventually hurt her. When asked, she should have immediately told investigators about the Waksal information she received on December 27, 2001. She should have told them that she tried to contact Waksal that day to find out what was going on. She should have been less defensive and not nearly as coy. Any securities lawyer she would have hired early on in the case - I mean, in the days following the sale - would have told her she had nothing dangerous to hide. Once she made the decision to talk to investigators - something she didn't have to do - she should have not played it cute. With so much to lose, what was she thinking monkeying around like that with the feds? Whether she truly was hiding something now is irrelevant; the jury decided that she looked like she had something to hide. In America, right now, that's good enough for a conviction.

What are the lessons of this case? There are many. Make sure you know what you are talking about when the feds come calling. Make sure you don't talk to the feds unless you have to. Don't ever try to erase a phone message when your assistant is watching. Make sure you make a clear investment plan with your stockbroker and then follow through with it. Make sure you don't get in the middle of a fight between your brokers. Make sure you (Bacanovic) don't let your employee (Faneuil) do what you ought to do yourself. And if you are Martha Stewart, the case and its result ought to remind you that there is a reason why people still say "penny wise and pound foolish."

But the biggest and clearest lesson is precisely the one that the feds hoped we all would learn from this case. It is that the government can target anyone, even the most popular and successful among us, and bring about a successful prosecution with even the fluffiest of evidence. There were no victims here. No bloodshed. The world isn't safer today than it was yesterday. Martha Stewart is going to jail because she didn't level to investigators about a telephone call that any investor would love to get and that many investors do get every day in this country. The only difference between her and them is that the feds decided to make an example of her. It worked. She's done. Watch out.