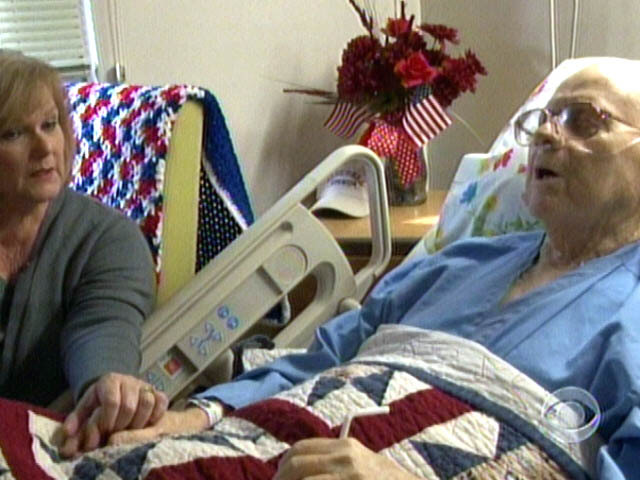 FRESNO, Calif. -- The Department of Veterans Affairs says its mission is "to fulfill President Lincoln's promise ... 'To care for him who shall have borne the battle.' "

At 14 VA hospitals around the country, that includes the special care veterans need when their final battle is coming to an end. CBS News correspondent Bill Whitaker reports.

A flower on the door at the VA hospital in Fresno ... A sign the veteran inside is near the end of life. There's a flower on Richard Murley's door.

"I'm in here for good. They don't know how long," says Murley.

Some 1,800 veterans die at VA facilities each day. Many die alone. Korean War veteran Richard Murley is dying from internal bleeding and his family lives some distance away. Here at the Fresno Veteran Affairs hospital, the staff has made end-of-life care a priority military mission.

The sound of gentle harp music soothes one dying veteran.

"That was beautiful," whispers the dying man.

Volunteers step in when family can't.

"A dignified death is one of the most precious gifts anyone can give," says Dr. Wessel Meyer, chief of the medical staff. He oversees the end-of-life program aptly named "No veteran dies alone."

It's a very important part of the general care offered by the VA, said Dr. Meyer.

"No veteran dies alone" is an all-volunteer effort. Barbara Stadler, a secretary at the VA during the day, donates much of her spare time -- and all of her compassion -- to make sure the veterans here have a human hand to hold till the end.

"I appreciate it," says Murley.

Volunteers dismiss the idea they're doing something extraordinary.

"It's just a person helping another person out. People do remarkable things every day," Koser told Whitaker.

"It's a blessing to be able to sit there with them and let them know they're not forgotten," says Barbara Stadler.

"In the spirit of no man left behind, the 'No veteran dies alone' program really embraces the concept of being there, saying 'Thank you,'" says Dr. Meyer.

Back in Murley's room, Stadler asks him "are you getting sleepy?"

"A little," says Murley. "These last several nights have been really strange and I feel kind of odd ... something's up."

Says Stadler: "Something's up. You're calm. Everything will be the way it's supposed to be, you know that."

Richard Murley, who served his country as an Army private first class, passed away a few days later. He was not alone.