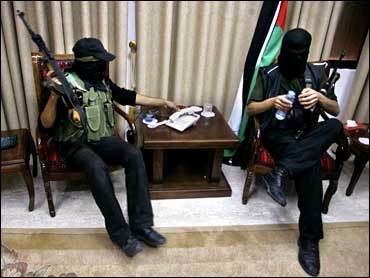 
Gaza is quiet, for now. Hamas controls daily life for more than a million Palestinians. Fatah has been vanquished to its base in the West Bank. Now the question is what happens next?

The Bush Administration and its European allies are holding talks on ways to bolster their support for the new Palestinian government being formed by Salam Fayyad, named to be the new prime minister by Palestinian President Mahmoud Abbas. Key to any new strategy may be talks to be held early next week at the White House when Israeli Prime Minister Ehud Olmert comes to visit President George W. Bush.

"They've got a big problem on their hands called a failed terrorist state in Gaza," said former U.S. Ambassador to Israel Martin Indyk and he wasn't talking about Israelis but about the Americans. "The Bush administration bet on Fatah and lost." Of course the same is true for the Israelis and for them having Hamas in charge of Gaza is an even bigger problem.

Former Middle East peace negotiator Aaron David Miller said that after all the money that's been spent since the Oslo agreement was signed in 1993 to support Fatah, under both Yassir Arafat and his successor, Abbas, he is not certain anybody believed Fatah would collapse in Gaza as quickly as it did.

"This is a monumental failure," Miller said in a telephone interview. "For Fatah, for Israel, for the United States, for the Egyptians and for the Jordanians." And addressing the larger context of regional conflict, it comes "at a time we cannot afford to be seen as weak."

That's different from the view at the State Department, where spokesman Sean McCormack said the Palestinian government being formed now will be considered to be the government of all the Palestinians, whether they live in the west Bank or in Gaza. Both agree one of the big unanswered questions is what Hamas will do now that they alone control Gaza. Another is how any international aid will make its way into Gaza and who will supervise its distribution to make certain Hamas does not profit in the process of getting the aid to the people it is intended to help.

Indyk looks at the new division in a different way. "With Hamas responsible for Gaza, Fatah effectively has control in the West Bank, and there is kind of a two state solution only it's not the two state solution that President Bush had in mind." The question of what happens now to that vision is yet another unanswered question.

Israeli diplomatic sources say they see what could be "a new opportunity and a first step by…the naming of a new prime minister who could be a strong partner." If anything, those who live in the region have a more realistic take on events this week. One area expert cautioned against the rush to think Hamas and Fatah were finished. "This is not a final divorce," the expert said. "Maybe they'll re-emerge as a union with a new power balance." As if to underscore the basic reality of the region, he added "Nothing here is simple."
By Charles M. Wolfson