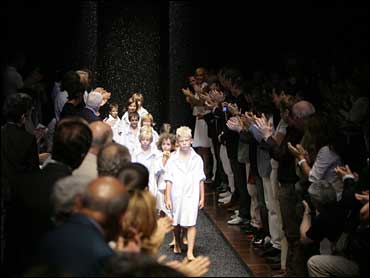 An emotional fashion crowd gave a standing ovation in tribute to the late designer Gianfranco Ferre at the presentation Sunday of his summer menswear collection. The show was held just one week after the 62-year old designer died of a brain haemorrhage in a Milan hospital.

Ferre finished the collection and worked out the details of the show, including the all-Italian sound track, before he became ill.

The collection draws its inspiration from the sea, from color scheme to fabrics shimmering like sun's reflection on water.

Impeccable suits, super soft embroidered leather jackets and a variety of sculpted shirts combined to turn the show into a lasting tribute to the designer known as "the architect of fashion."

The show's finale, a parade of 12 little boys wearing their daddy's pristine white Ferre shirts, brought the house down.

The collection was clearly a hit. "It's got style; it's got grace," said a German fashion magazine editor who attended the show. "There were many details I liked a lot, and it's a wonderful collection from Ferre."

Ferre, who earned a degree in architecture as a young man, had been a leader in the fashion world since the mid-1970s, notably taking over the fabled House of Dior in Paris in 1989. In
1996, he returned to Milan to concentrate on his own men's and women's collections.