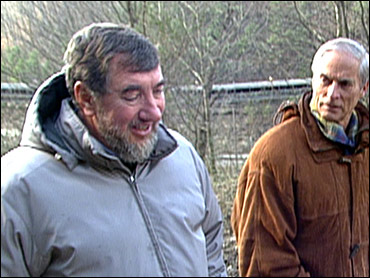 He's an engineer, who until recently was head of the National Mine Health and Safety Academy (MSHA), a branch of the Department of Labor, which trains mining inspectors.

But he lost that job last year, after he blew the whistle on what he called a whitewash by the Bush administration of an investigation into a major environmental disaster. Correspondent Bob Simon reports.

"I had never seen anything so corrupt and lawless in my entire career as what I saw regarding interference with a federal investigation of the most serious environmental disaster in the history of the Eastern United States," says Spadaro.

"I've been in government since Richard Nixon. I've been through the Reagan administration, Carter and Clinton. I've never seen anything like this."

What he's talking about is what he calls a government cover-up of an investigation into a disaster 25 times the size of the Exxon Valdez spill.

It happened in October of 2000, when 300 million gallons of coal slurry - thick pudding-like waste from mining operations - flooded land, polluted rivers and destroyed property in Eastern Kentucky and West Virginia. The slurry contained hazardous chemicals, including arsenic and mercury.

"It polluted 100 miles of stream, killed everything in the streams, all the way to the Ohio River," says Spadaro, who was second in command of the team investigating the accident.

The slurry had been contained in an enormous reservoir, called an impoundment, which is owned by the Massey Energy Company. One night, the heavy liquid broke through the bottom of the reservoir, flooded the abandoned coalmines below it and roared out into the streams.

Spadaro says the investigators discovered the spill was more than an accident -- it was an accident waiting to happen.

During the investigation carried out by Spadaro and his colleagues, it came out that there had been a previous spill in 1994 at the same impoundment. The mining company claimed it had taken measures to make sure it wouldn't happen again, but an engineer working for the company said the problem had not been fixed, and that both he and the company knew another spill was virtually inevitable.

"He said, 'We knew there would be another breakthrough,'" says Spadaro. "We knew. And I asked him how many people in the company knew and he said, 'Well, at least five people.'"

So why didn't they fix it? "It would have been expensive to find another site. And I think they were willing to take the risk … It was a certainty," says Spadaro.

He says it was a certainty because there was only a very thin layer of rock at the bottom of the reservoir. But that's not what the mining company had told the government.

"They told the government that there was a solid coal barrier, at least 70 to 80 feet wide between the mine workings and the bottom of the reservoir," says Spadaro of the barrier, which is less than 20 feet. "They were misrepresenting the facts … and they knew that. The company knew that and I'm sorry to say I believe some people within the government knew that."

Davitt McAteer was Spadaro's boss when the disaster happened, and head of the MSHA. He says Spadaro is right, that his own regulators hadn't done their job: "I know they didn't do enough in terms of enforcement because the thing failed. That's the proof."

"This was a catastrophic failure. By the grace of God only did we avoid fatalities," says McAteer, who expected the report to be harsh. The investigators were going to cite the coal company for serious violations that would probably have led to large fines and even criminal charges.

But all that changed when the Bush administration took over and decided that the country needed more energy -- and less regulation of energy companies. The investigation into Massey Energy, a generous contributor to the Republican Party, was cut short.

"The Bush administration came in and the scope of our investigation was considerably shortened, and we were told to wrap it up in a few weeks," says Spadaro.

"They cut it off. They did," says Ellen Smith, who publishes the country's only newsletter devoted entirely to mine safety and health. She's been writing about the mining industry for 16 years.

"People I spoke with, who were on the investigation team, told me that they believed it was absolutely cut short, that they had more work to do and they were told to wrap it up," says Smith.

"It appeared to me they thought we were getting too close to issuing serious violations to the mining company," says Spadaro.

The new head of MSHA, a Bush appointee named Dave Lauriski, was a former mining industry mining executive, and so were his top deputies.

Spadaro says Lauriski came into his office one day, and insisted he sign a watered down version of the report -- a version that virtually let the coal company and MSHA off the hook.

"He said , 'I'm in a hard spot here and I need you to sign this report," recalls Spadaro. "I said, 'You'd best take my name off that report because I'm never going to sign that report.'"

Originally, Spadaro says his investigating team wanted to cite the company for eight violations. But in the end, Massey Energy was only cited for two violations, and had to pay approximately $110,000 in fines – not a lot for the fifth largest mining company in America.

Massey Energy, declined to talk to 60 Minutes. And Lauriski declined to be interviewed. So did his boss, Elaine Chao, the secretary of labor. The Department of Labor has consistently stood behind the report.

But Linc Chapman, who lives in the path of that black slurry which flooded his property and terrified his 13-year-old daughter, insists the investigation was a whitewash: "I have absolutely no confidence anymore in any of our regulatory agencies."

He's added a second floor to his home, so his family wouldn't worry about being buried alive if there were another spill. It's a possibility that he believes may happen as long as there are hundreds of slurry impoundments in the mountains of Appalachia.

Three years after the spill, there's still slurry on the Chapman's property, and you don't have to dig deep to find it. Now, the Chapmans want to sell their house, but because of the slurry on the property, there aren't any buyers.

"No one wants it. Basically it's cost me everything that I have invested here, everything I've ever worked for all my life," says Chapman.

All Spadaro has worked for in his life has been mine safety. So when he felt his new bosses were trying to sabotage the investigation by trying to get him to go along with a cover-up, he complained to the Labor Department's inspector general.

The inspector general looked into the matter and released a report, saying: "None of the allegations brought forward by Mr. Spadaro were substantiated."

"That statement is a lie, is a flat out lie," says Spadaro.

"I do not trust the IG report. So much information was withheld from the public," adds Smith, who was shocked to see that about half of the report had been blanked out by the government. "If you look through this report, you will see huge black marks. …They were withholding information that may or may not have proved Spadaro's allegations. And we will never know what that report says."

Spadaro also says that when the new administration came in, they doled out lucrative contracts for work at the academy to their friends. One contract, for a training program, was worth nearly $200,000. "It wasn't put out for bid at all," says Spadaro. "They violated the law and they knew it."

MSHA denies violating the law, but Spadaro says they pulled it off with some clever bookkeeping, by dividing it into smaller contracts. "They thought no one would notice," says Spadaro.

They were wrong. Smith looked into this and says she found no-bid contracts: "I found that contracts went out to the two deputy assistant secretaries for MSHA to former business associates and friends. They did not go out for bid."

So what will happen to Spadaro? "He is absolutely getting his life ruined," says Smith.

Last year, government agents entered Spadaro's office, went through his files, and locked him out. "They changed the locks on my door and still have not allowed me to return to my work place," says Spadaro, who spends his days at home.

The government says he was removed from his job primarily for abusing his authority, failing to follow procedures, and also for using his government credit card without authorization. Spadaro denies all the charges.

"There are cases upon cases of people who have had far more egregious charges than Jack Spadaro," says Smith.

"You have a guy in one of the regulatory agencies that actually wants to stand up for what's right," adds Chapman. "And because he rocks their boat, he gets thrown overboard."

Residents of Appalachia gathered in Charleston, W.Va., to demand that Spadaro get his job back. Without Spadaro, they say they're afraid there's no one left in government who will stand up for the residents instead of for the coal companies.

Spadaro is now back -- sort of. MSHA officials recently told Spadaro that he's not being fired. Instead, he's being demoted and taking about a $35,000 pay cut. He's also being transferred to the agency's Pittsburgh office, far from his family in West Virginia.

But Spadaro says he has no plans to go anywhere, except perhaps to court -- to sue the government. "I think that they thought they could simply roll over me, and I would be gone and out of their way," says Spadaro. "But I'm gonna fight them forever if it takes it."

Spadaro has asked the Office of Special Counsel for Whistleblower Protection for help, and they've agreed to investigate whether he was a victim of retaliation by MSHA officials. The Labor Department's inspector general is also looking into whether or not MSHA officials broke the law in awarding government contracts.