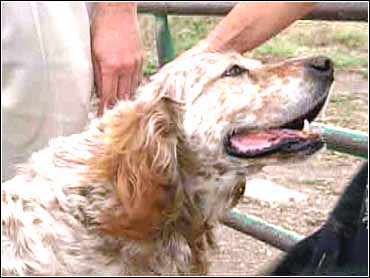 Champ is an 11-year-old English setter - and a lifesaver. A few years ago he was a fine hunting dog. Although he is now too old for that, owners Brad and Janine Stickleman say he still has a very valuable skill.

"When there is bad weather, he heads for the basement," says Janine Stickleman.

On May 17, 2000, Champ went down to the basement and stayed there all day. "He wouldn't come out," says Brad Stickleman. "We knew something was in the air."

And there was: a huge tornado with 200 mph winds. It carved a 5-mile scar across the Nebraska countryside. The Sticklemans' farm is too far from town for them to hear any warning sirens. The only sign that anything was about to happen came from Champ.

"He was our only warning system," says Janine Stickleman.

When they spotted the twister, Brad and Janine Stickleman ran to join Champ in the basement. But just as the tornado passed over, Champ scampered upstairs.

The couple thought they would be killed. "You could just feel when that roof went, and the boards breaking and the glass breaking," Brad Stickleman remembers.

Although they survived, the twister destroyed their house. It ripped the roof off, collapsed the chimney and destroyed the ceilings. When the dust settled, the cattle and the couple's two basset hounds were fine. But Champ was gone.

Tornado chaser Jeff Piotrowski was nearby, however. He loves bad weather. With an arsenal of tornado-tracking gadgetry and video equipment, he races through the Midwest throwing caution - and sometimes traffic laws - to the wind.

Piotrowski is drawn to severe weather. Twenty-five years ago, when he was 14, he was almost killed by a flood in Tulsa; since then Piotrowki has been driven to understand weather, he says.

He and his partner Brian Stertz were there when the tornado hit Brady on May 17.

The Stickelmans saw Champ again - but not before the dog shared a unique moment with someone else who can sniff out bad weather.

While the Sticklemans had enouh sense to go into the basement, Piotrowski stayed outside - and had the time of his life. Comparing his avocation to fishing or golf, he calls it a hobby.

"Everything has its risk, and this may have a little higher risk than the average hobby, but it's a risk that you take because of the benefit to the public," he says.

And Piotrowski chased the storm until it died. At that point, he saw something that surprised him: Champ emerging from the wreckage, limping. The dog wasn't injured; Champ was limping from arthritis. But he had been through a lot. The dog looked like he was in shock, Piotrowski says.

Piotrowski petted Champ, which seemed to calm him down. "I was very moved by the dog," he says. "I'm very compassionate toward dogs. I love animals."

The tornado-chasing Piotrowski helped return Champ to his owners. A month later, he came back to give the Sticklemans a copy of his footage, and a photo of their house just before it was hit by the tornado.

The house was declared a total loss. The day it came down, Janine Stickleman could barely watch. The Sticklemans are now rebuilding and watching Champ a lot more closely now. If Champ looks concerned, Janine and Brad Stickleman worry.

"They're smarter than humans," says Brad Stickleman. "If you just pay attention to nature, a guy could learn a lot."