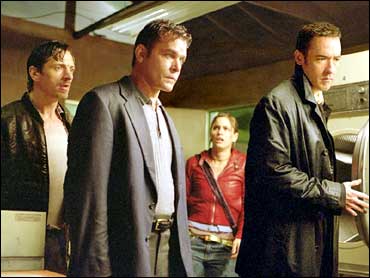 Ray Liotta and John Cusack managed to knock a comedy about controlling one's temper out of the top spot.

"Identity," a thriller about stranded tourists, took in $17 million in its opening week, edging out "Anger Management," which fell to second place with $16 million dollars. The Disney film "Holes" took in $13 million dollars in its second week.

The weekend's other new releases debuted weakly. The con-men romp "Confidence," with Edward Burns and Dustin Hoffman, came in at No. 5 with $4.75 million.

"It Runs in the Family," a comic drama starring Kirk and Michael Douglas, opened at No. 9 with $3 million. "The Real Cancun," a big-screen variation of MTV's "The Real World" produced by that show's creators, took in $2.3 million to finish in 10th place.

Overall revenues rose, with the top 12 movies grossing $78.6
million, up 9 percent from the same weekend a year ago. For the
year, though, the box office is lagging about 7 percent behind
2002's revenues.

Business should heat up next weekend as "X2: X-Men United"
opens. Analysts saying the sequel's debut could exceed the $54.5
million first-weekend haul of "X-Men" in July 2000.

"'X2' is probably going to do great business, but it's a tough
comparison when you look at the year ago numbers of 'Spider-Man,"'
which debuted with a record $114.8 million, said Paul
Dergarabedian, president of box-office tracker Exhibitor Relations.

Sony, the studio behind "Spider-Man," had this weekend's No. 1
and 2 movies in "Identity" and "Anger Management."

"We're having a very good weekend," said Rory Bruer, president
of Sony Pictures Releasing. "We really figured `Identity' would
open fairly strong, but this is far better than anticipated."

"Identity," with John Cusack, Ray Liotta and Amanda Peet, is a
thriller about travelers stranded in a rainstorm at a motel where
guests are bumped off one by one.

Among limited-release debuts, Al Pacino's thriller "People I
Know" opened in five theaters with a $6,800 average. Pacino plays
a publicist caught up in a murder mystery.

Matt Dillon's directing debut "City of Ghosts," in which he
co-stars with James Caan in a thriller about insurance con men on
the lam in Cambodia, averaged $6,269 at six theaters.

Here are the numbers according to Hollywood.com: