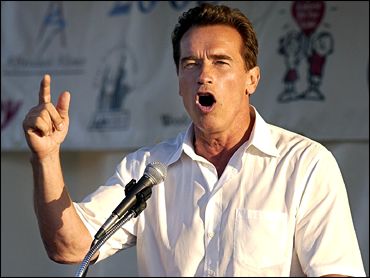 In the past week, Arnold Schwarzenegger was called on to apologize for groping women and making other unwanted sexual advances. Even though he admitted that he had done some of these things, Arnold went for the non-apology apology. He didn't apologize for what he did; he apologized if he offended anybody when he did it.

But his non-apology seemed to work anyway because he was smart enough to do it quickly. Bill Clinton didn't have the same wisdom, so his pathetic too-little-too-late apology was a big failure. So, Arnold ends up in the governor's office, and Mr. Clinton ends up desperately seeking photo ops. If Arnold can't deliver on some of his campaign promises, he'll probably apologize right away again, and people will forgive him. And he won't be able to deliver on everything, because once he's in office, he'll really have his hands full. Of course, Arnold is used to that.

If it's really important to be forgiven, the apology also has to contain the "I accept full responsibility" phrase. This seems to work even for scandalized television preachers, cheating football coaches, and college athletes who steal television sets. (Sometimes it's necessary to cry along with the apology.) President Bush hasn't apologized for the war in Iraq, but if his popularity continues to decline, look for him to make a statement like this sometime before the election:

"We were given some misinformation and poor intelligence about Saddam Hussein's connection to al Qaeda, Weapons of Mass Destruction, and Iraq's being an imminent threat to the United States. As president, I accept full responsibility for this, and apologize for the intelligence failure. I am determined to get to the bottom of this, and I will succeed because nothing can deter Americans in their search for the truth." If he is smart enough to say something like this soon, the American people will not only accept his apology, but will embrace him for being "big enough" to have made it.

The fact that it's hard for people to apologize has given the words "I'm sorry" extra weight. No less an icon of the American male than Fonzie on "Happy Days" had so much trouble with those words that he would stutter when he wanted to apologize, saying, "I'm sor...sor... sorry." But he would eventually get the apology out, earning everyone's respect and the audience's applause because he was "man enough" to apologize.

Being man or woman enough to apologize means a great deal in our society. Too much. Criminals get lighter sentences if they "show remorse." Why? How does that undo the crime? And how often has somebody done something awful to you, and then felt they were off the hook because they apologized? Of course, people should say "I'm sorry" when they've done something wrong. But sometimes just saying those words is not enough.

I'm not a very good artist — my stick figures would embarrass a 4-year-old. But if I could draw a couple of political cartoons, this is what they would look like:

One would show an Attila the Hun-like figure finally being brought to justice after pillaging village after village. The other cartoon would show a wayward husband in bed with two of his mistresses as his hurt wife is walking out the door with her suitcase. The caption for each of them would be the same — the transgressor would be saying, "Hey, why are you so upset? I said I was sorry."

Lloyd Garver has written for many television shows, ranging from "Sesame Street" to "Family Ties" to "Frasier," and, yes, "Happy Days." He has also read many books, some of them in hardcover.