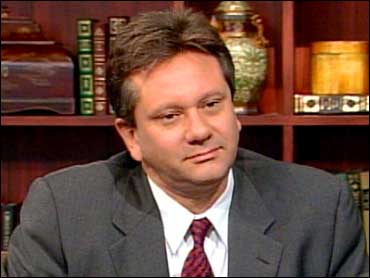 Academy award-winning actress Audrey Hepburn will always be remembered for her on-screen charm in movies like "Breakfast At Tiffany's" and "My Fair Lady." She also made her mark off screen, crusading to help the less fortunate, particularly the children of the world.

Now a new book provides a unique look at her life. It's entitled "Audrey Hepburn, An Elegant Spirit" and was written by her son, Sean Hepburn Ferrer.

He writes about her not as movie star but as a mother. "I think that's one of the greatest legacies she gave us," Ferrer tells The Early Show co-anchor Hannah Storm. "We're fortunate to have this extraordinary foundation of, I guess, not growing up in Hollywood and growing up in this farmhouse in Switzerland. She wanted a normal life for herself and for us. And it's a valuable and beautiful memory that she left us."

Emotional as he talks about his late mother, Ferrer says he thought long and hard before he wrote the book, which was 10 years in the making. He says, "I sort of started to compose emotions and thoughts after she passed away. It was years until I could actually put a pen to paper, but some of the writing happened sort of on the inside."

So he says he didn't feel it was his place to write one. "Audrey Hepburn, An Elegant Spirit" Ferrer says, is "more sort of using conversations that she and I had during the last two months of her life, once we found out that she wasn't well. And, again, once we found out that she wasn't going to get better. And if medicine has anything to offer at that point, it's that you've given notice, that you have time to sort of prepare and to spend quality time, saying all of the things that you want to say to one another."

Ferrer talks about how she left her film career when it became evident that he couldn't travel with his mother and he had to stay in school. He notes one of the most serious impacts of her sadness was the fact that her father left when she was quite young and she didn't see him for two decades.

He says, "I think losing her father early in life was difficult. And then my father actually tracked him down after the war and he was right, she did realize after seeing him, after 25 years that he was an emotionally disconnected man. And so emotionally it would have ended up in the same place. Whether he was there or not, she would have felt the same way so it was good for her to find him again."

Hepburn grew up very poor during World War II in Europe and wanted to be a prima ballerina. "And was told no," says Ferrer, "That she would probably have an excellent career as a teacher and as a second ballerina, probably a more even income and more even career. But she really wanted to excel at what she was going to do, so she went on to the next thing and she needed to make a living, and took the next part and the next part."

She was able to dance in her movies. One of Ferrer's favorites is "Funny Face." He says, "because of the missed ballet career and her opportunity to finally sort of take off with Fred."

Just as she was committed to a do a good job on the screen, she worked tirelessly for the children of the world.

At the same time she really felt a burden for these children. He says, "She never forgot that feeling at the end of World War II, after spending seven years in an occupied Holland - it was one of the longest occupied countries in World War II - of what an early version of UNICEF felt like when they showed up in Holland bringing everything from medicine, blankets, food. The first piece of chocolate you've had in seven years. She never forgot that and she wanted to sort of give back to them as well."