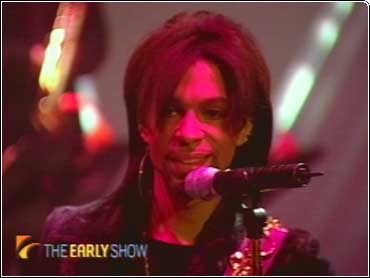 Seventeen years ago, when he went by the name of Prince, the Artist detailed the current millennium madness with the hit single 1999. Now, at turn of the century, he is back with a new album, his first in three years, called Rave un2 the Joy Fantastic. Early Show Anchor Bryant Gumbel spoke to him from his studio in Minneapolis.

The Artist is retiring the song on Dec. 31 during a pay-per-view concert on cable TV. "Won't be no need to play it in the 00s," he told Gumbel.

While he admitted to feeling a little overworked, the 41-year-old artist also said he is looking forward to the New Year's Eve concert, which might run as long as three hours.

"We wanted to do something that was fun at the end of the year," he said. "You know, to counter all the madness that's going on... Everybody is staying home New Year's Eve. So we wanted to throw a bash."

He'll be joined by such other artists as NPG, Larry Graham, Maceo Parker, Sheryl Crow.

Gumbel pointed out that there was no financial need for the Artist to produce another album this year. In fact, he could have had a living for the rest of his life performing 1999 this year alone. Has there been pressure on him to do the song for someone, somewhere?

"A little bit of pressure," the Artist replied. "Monetarily, mostly. But, you know, the world isn't run by money. It runs by the grace of God. The more we let Him get back in charge of things instead of entropy, we can do things properly."

Does the Artist have any particular goals or personal wishes for the new millennium?

"You know, I'm kind of vibing like Stevie Wonder's vibing. Vibing like Larry Graham is vibing," he said. "Time for everybody to come together and realize that we're all one. No sense in the craziness. Let's just get it right."