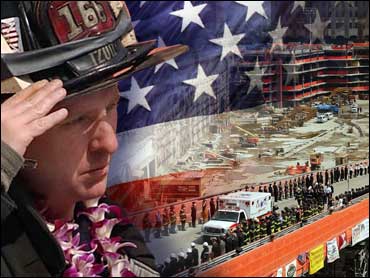 With the peal of a Fire Department bell and the departure of an empty stretcher, the still-missing victims of the World Trade Center's unspeakable horror were remembered Thursday in a wordless ceremony marking the end of the eight-and-a-half-month cleanup operation.

The solemn service began precisely at 10:29 a.m., the time the second tower collapsed on Sept. 11. It began with a bell sounding out the 5-5-5-5 fire code — four sets of five rings - in memory of 343 fallen firefighters lost at Ground Zero.

The stretcher, escorted by an honor guard representing various agencies and victims' groups, was brought up a 500-foot ramp from the pit where workers labored around the clock.

"This is the closest point I guess I can get to being with him again," said David Bauer III, whose father — a Cantor Fitzgerald worker — was one of the more than 1,700 victims still not identified.

Hundreds of people began gathering at the site more than an hour before the service, filling the seven-story pit that once was the basement of the twin skyscrapers that anchored lower Manhattan.

"When we first got down to the job, there was not even water," said Leo Di Rubbo, 55, a 35-year construction veteran who helped oversee the cleanup as a superintendent from day one.

"Everyone's face was dirty and black from the dust," he said, "and the only places that weren't" were the tracks of tears.

The unprecedented cleanup effort finished several months earlier than anticipated and at a fraction of the estimated cost.

In the weeks ahead, workers will continue to sift through debris hauled to Staten Island, reports CBS News Correspondent Byron Pitts, still hoping to find and identify more remains. Those remains that cannot be identified will be retained, in case new technology someday makes it possible.

"I have mixed emotions about the whole thing," said Port Authority Police Officer Ray Murray, a regular at the site since Sept. 11, wondering about the victims still missing.

"I'm glad that we get to go on with our lives," he continued. "At the same time, we'll never forget what happened here."

A truck carrying the trade center's last steel beam, which stood until it was cut down Tuesday night, followed the empty stretcher. Draped in a black cloth and American flag, it was driven to a Kennedy Airport hangar to be put in storage, perhaps to be used someday for a monument.

At times, the only sounds were the rumble of vehicles and the breeze, which carried a trace of the acrid smell that hung over lower Manhattan for months after the attack.

Among those in the crowd were Mayor Michael Bloomberg and his predecessor, Rudolph Giuliani, who won acclaim for his stewardship of the city after the attack.

At the end, the crowd burst into applause for the officers, firefighters and construction workers leaving Ground Zero. Some tossed flowers into the void where the towers once stood. Many hung back after it was over, leaning over guardrails to stare into the crater.

Control of the site now moves from the city to the Port Authority of New York and New Jersey, which owns the land. A redevelopment plan is expected by year's end.