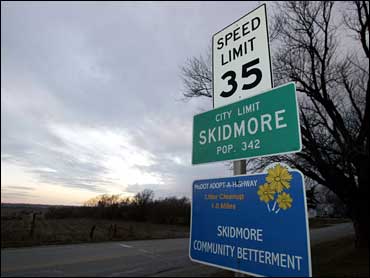 If records were kept on per capita misery, Skidmore, population about 350, might be near the top of the list.

The town sits on a hill above the Nodaway River amid cornfields in northwestern Missouri. Residents farm, man the town's lone gas station and clock in at nearby factories.

Skidmore is not a hotbed of any activity, much less the criminal kind. In 2005, all of Nodaway County recorded 16 violent crimes.

But for such a small town, Skidmore has an unusually violent history. The most recent of the especially brutal crimes was the slaying of a pregnant woman whose fetus was cut from her womb.

"It doesn't matter where I go in the U.S.," Nodaway County Sheriff Ben Espey said. "I tell people I live in northwest Missouri and they say, `Oh, do you know where Skidmore is?' It's a worldwide thing, really.

"I say, `Yes,' and then I tell them they should believe about a third of what they see on television and read in books."

The murdered woman, Bobbie Jo Stinnett, was eight months pregnant. Lisa Montgomery, 39, is on trial in Kansas City, about 100 miles to the south, accused of walking into Stinnett's house in December 2004, strangling her with a rope and slicing the baby out of her womb with a kitchen knife.

Montgomery, of Melvern, Kan., has pleaded not guilty to kidnapping resulting in death, and her lawyers are pursuing an insanity defense. Federal prosecutors are seeking the death penalty if she is convicted.

If Montgomery is found not guilty by reason of insanity, she would undergo a mental evaluation and a judge would decide if she will be released or committed to a mental institution.

Beyond the Stinnett case, Skidmore has experienced other mysterious tragedies, some of which remain unsolved.

First was the death of Ken Rex McElroy, also known as the Skidmore Bully. McElroy, who was feared and loathed around town, was killed in July 1981 when a group came out of the Skidmore Food and Drink and someone in the crowd shot McElroy as he sat in his truck. There were plenty of witnesses, but no one ever identified the killer or killers.

McElroy's death and the collective town silence that followed have been chronicled in a book, "In Broad Daylight" and in a television movie.

In October 2000, Wendy Gillenwater was stomped to death by her boyfriend, who is serving life in prison.

And in April 2001, 20-year-old Branson Perry disappeared from his front yard. He hasn't been seen since, though his name came up in 2004 when a former minister, Jack Wayne Rogers, was sentenced to 30 years for a string of pornography charges and for cutting off a man's genitals. Authorities had searched Rogers' home looking for evidence that would implicate him in Perry's death. Rogers has denied killing Perry and was not charged in the case.

While people may be fascinated with Skidmore's gruesome history, there is more to the town than the crimes committed there, Espey said.

"It's just another small town, the same as all the others," the sheriff said. "It kind of upsets me when I keep hearing McElroy this and McElroy that. ... This area is rolling hill farmland, a lot of common-sense people. Crime rates are low, drugs are as they are everywhere. But it's not near the issue it was five years ago."

Michael Mangis, executive director of the Center for Rural Psychology in Elburn, Ill., said that while the number and nature of Skidmore crimes may be extraordinary, when it comes to small towns, there is a tendency to focus on the morbid or the odd.

"There's a feeling that people outside aren't going to understand," Mangis said. "The people who live there might think this is a thing people are curious about, and maybe they'll make fun of us, they'll use it to laugh at us and feel superior to us. But they won't understand."

He said that is another reason why Skidmore residents might resent people who continue to bring up old wounds.

Residents may say, "We're trying to be a different kind of community from what we were in the past," he said. "We don't want to be known as the freaky little town where the strange things happened."

Lisa Law has lived in Skidmore for about six years. Her home is two blocks from Stinnett's, which hasn't been lived in since the slaying. Stinnett's baby, Victoria Jo, survived and lives with her father.

Skidmore is as good a place to live as any, she says, and maybe better than some bigger towns, where it might be more difficult to know your neighbors.

"At least here, you know who to stay away from," said Law, 30. "You know the dealer's over there, and this person does this, and that person does that. You know."