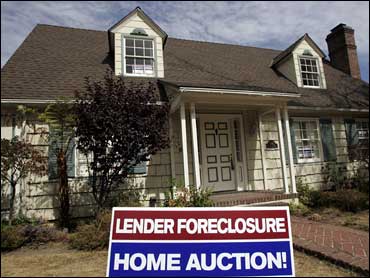 When it comes to bailouts of American business, Barney Frank and the Congress may be just getting started. Nearly two trillion tax dollars have been shoveled into the hole that Wall Street dug and people wonder where the bottom is.

As correspondent Scott Pelley reports, it turns out the abyss is deeper than most people think because there is a second mortgage shock heading for the economy. In the executive suites of Wall Street and Washington, you're beginning to hear alarm about a new wave of mortgages with strange names that are about to become all too familiar. If you thought sub-primes were insanely reckless wait until you hear what's coming.

One of the best guides to the danger ahead is Whitney Tilson. He's an investment fund manager who has made such a name for himself recently that investors, who manage about $10 billion, gathered to hear him last week. Tilson saw, a year ago, that sub-prime mortgages were just the start.

"We had the greatest asset bubble in history and now that bubble is bursting. The single biggest piece of the bubble is the U.S. mortgage market and we're probably about halfway through the unwinding and bursting of the bubble," Tilson explains. "It may seem like all the carnage out there, we must be almost finished. But there's still a lot of pain to come in terms of write-downs and losses that have yet to be recognized."

In 2007, Tilson teamed up with Amherst Securities, an investment firm that specializes in mortgages. Amherst had done some financial detective work, analyzing the millions of mortgages that were bundled into those mortgage-backed securities that Wall Street was peddling. It found that the sub-primes, loans to the least credit-worthy borrowers, were defaulting. But Amherst also ran the numbers on what were supposed to be higher quality mortgages.

"It was data we'd never seen before and that's what made us realize, 'Holy cow, things are gonna be much worse than anyone anticipates,'" Tilson says.

The trouble now is that the insanity didn't end with sub-primes. There were two other kinds of exotic mortgages that became popular, called "Alt-A" and "option ARM." The option ARMs, in particular, lured borrowers in with low initial interest rates - so-called teaser rates - sometimes as low as one percent. But after two, three or five years those rates "reset." They went up. And so did the monthly payment. A mortgage of $800 dollars a month could easily jump to $1,500.

Now the Alt-A and option ARM loans made back in the heyday are starting to reset, causing the mortgage payments to go up and homeowners to default.

"The defaults right now are incredibly high. At unprecedented levels. And there's no evidence that the default rate is tapering off. Those defaults almost inevitably are leading to foreclosures, and homes being auctioned, and home prices continuing to fall," Tilson explains.

"What you seem to be saying is that there is a very predictable time bomb effect here?" Pelley asks.

Just look at a projection from the investment bank of Credit Suisse: there are the billions of dollars in sub-prime mortgages that reset last year and this year. But what hasn't hit yet are Alt-A and option ARM resets, when homeowners will pay higher interest rates in the next three years. We're at the beginning of a second wave.

"How big is the potential damage from the Alt As compared to what we just saw in the sub-primes?" Pelley asks.

"How do you know that?" Pelley asks.

"Well we know it based on current default rates. And this is before the reset. So people are defaulting even on the little three percent teaser interest-only rates they're being asked to pay today," Tilson says.

That second wave is coming ashore at a place you might call the "Repo Riviera" - Miami Dade County. Oscar Munoz used to sell real estate; now his company clears out foreclosed homes.

"I wonder do you ever come to houses where the people are still here?" Pelley asks.

"Absolutely," Munoz says. "That's really a sad situation. I'd rather not meet the people."

Asked why not, Munoz says, "It's not easy to come in and move a family out. It's just our job to do it for the bank. It's just the nature of what's going in the market right now."

Munoz says his company alone gets about 20 to 30 assignments per day. "And we're one of the few companies right now who are hiring. We have to hire people because the demand is so high," he tells Pelley.

People who've been evicted tend to leave stuff behind. The next house is usually much smaller. Banks hire Munoz to move the possessions out where, by law, they remain for 24 hours. Often the neighbors pick through the remains.

Once the homes are empty the hard part starts - trying to find buyers in a free-fall market.

Miami real estate broker Peter Zalewski talks like a man with a lot of real estate to move. "We have 110,000 properties for sale in South Florida today, 55,000 foreclosures, 19,000 bank owned properties. Sixty-eight percent of the available inventory is in some form of distress. They need someone to clean it up."

Asked what the name of his company is, Zalewski says, "It's called Condo Vultures Realty."

"That in times of distress, and in times of downturn, there's opportunity. And you know, vultures clean up the mess. A lot of people seem to think they kill, but they don't actually kill, they clean," he says.

The killing, in Miami, was done by the developers back when it seemed that the party would never end. They sold hyper-inflated condos at what amounted to real estate orgies-sales parties for invited guests who were armed with option ARM and Alt-A loans. "There were red ropes outside. They had hired cameramen, and they had hired photographers to almost set the scene of a paparazzi," Zalewski remembers.

"They were hiring fake paparazzi? To make the customers feel like they were special?" Pelley asks.

"You were selling a lifestyle," Zalewski says.

Asked what roles these exotic mortgages played, Zalewski says, "They were essential. They were necessary. Without the Alt A or option ARM mortgage, this boom never would've occurred."

"They stopped checking whether the income was even real. They turned to low and no-doc loans, so-called 'liar's loans' and jokingly referred to as 'ninja loans.' No income, no job, no assets. And they were still willing to lend," Tilson says.

"But help me out here. How does that make sense for the lender? It would seem to be reckless, in the extreme," Pelley remarks.

"It was," Tilson agrees. "But the key assumption underlying, the willingness to do this was that home prices would keep going up forever. And in fact, home prices nationwide had never declined since the Great Depression."

On the way up, everyone wanted in. No one expected to feel any pain. People like acupuncturist Rula Giosmas became real estate speculators.

Giosmas says she bought about six properties in this last five-year period as investments. She says she put 20 percent down on each. Now they're all financed with option ARM loans.

Asked what she understood about the loans, Giosmas says, "Well, unfortunately, I didn't ask too many questions. I mean in the old days, I would shop around. But because of the frenzy, and I was so busy looking to buy other properties, I didn't really focus on shopping around for mortgage brokers."

"But if you're investing in real estate, you're buying multiple properties, you should be asking a lot of questions," Pelley remarks. "Why didn't you ask?"

"I was busy. I was really busy looking at property all the time, all day long," she replies.

She also acknowledges that she didn't read the paperwork. Now she's losing money on every property.

"You know that there are people watching this interview who are saying, 'You know, she was just foolish. She was greedy and foolish. She was buying small apartment buildings and wasn't paying enough attention to how they were financed,'" Pelley points out.

"My full-time job is I'm an acupuncturist. So, this was just a side thing," she says.

Giosmas says she was misled and she hopes to renegotiate her loans. But many other buyers have simply walked away from their properties. One Miami luxury building was a sellout, but when 60 Minutes visited, a quarter of the condos were in foreclosure.

Zalewski says one of those condos was originally purchased in October 2006 for $2.4 million. Now he says the asking price from the lender is $939,000.

And there are tough years to come because, just like the sub-primes, the Alt-A and option ARM mortgages were bundled into Wall Street securities and sold to investors.

Sean Egan, who runs a credit rating firm that analyzes corporate debt, says he expects 2009 to be miserable and 2010 also miserable and even worse.

Fortune Magazine cited Egan as one of six Wall Street pros who predicted the fall of the financial giants.

"This next wave of defaults, which everyone agrees is inevitably going to happen, how central is that to what happens to the rest of the economy?" Pelley asks.

"It's core. It's core, because housing is such an important part. We're not going to get the housing industry back on track until we clear out this garbage that's in there," Egan explains.

"That hasn't cleared out yet. We haven't seen the bottom," Pelley remarks.

"It's getting worse," Egan says. "There are some statistics from the National Association of Realtors, and they track the supply of housing units on the market. And that's grown from 2.2 million units about three years ago, up to 4.5 million units earlier this year. So you have the massive supply out there of units that need to be sold."

"What with the housing supply increasing that much, what does it mean?" Pelley asks.

"It means that this problem, the economic difficulties, are not going to be resolved in a short period of time. It's not gonna take six months, it's not gonna 12 months, we're looking at probably about three, four, five years, before this overhang, this supply overhang is worked through," Egan says.

In the next four years, eight million American families are expected to lose their homes. But even after the residential meltdown, Whitney Tilson says blows to the financial system will keep coming.

"The same craziness that occurred in the mortgage market occurred in the commercial real estate markets. And that's taking a little longer to show. But there are gonna be big losses there. Credit cars, auto loans. You name it. So, we're still, you know, we're maybe halfway through the mortgage bubble. But we may only be in the third inning of the overall bursting of this asset bubble," Tilson says.

"Does that mean that the stock market is gonna continue plunging as we've seen the last several months?" Pelley asks.

"Actually we're the most bullish we've been in 10 years of managing money. And the reason is because the stock market, for the first time I can say this, in years, has finally figured out how bad things are going to be. And the stock market is forward looking. And with U.S. stocks down nearly 50 percent from their highs, we're actually finding bargains galore. We think corporate America's on sale," Tilson says.

The stock market will still have a lot of figuring to do with more troubling news on the horizon. The mortgage bankers association says one out of 10 Americans is now behind on their mortgage. That's the most since they started keeping records in 1979.