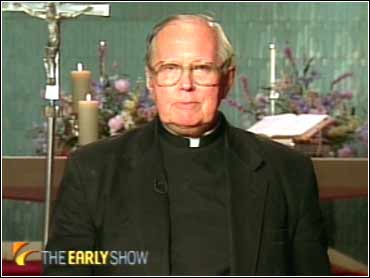 The 1973 horror film The Exorcist is considered one of the scariest movies every made.

The terrifying story of a priest's battle for the soul of a young girl possessed by the devil is being rereleased in theaters Friday.

But for some, the battle against evil is not make believe. It is a job.

In Hyde Park, N.Y., Father James LeBar is an expert on Satanism and cults and also a practicing exorcist for the Roman Catholic Archdiocese of New York.

Jane: We've all seen the movie The Exorcist with everything that happens during an exorcism. Tell us what it's really like.

Father LeBar: Well, that movie pretty much shows what it's really like. It's a compilation of a number of things that would happen in different exorcisms, but there is the levitation, expectoration there is the screaming. All of those things take place in a real exorcism.

Jane: How many exorcisms have you performed yourself?

Father LeBar: Well, I don't keep an exact count, but I've been doing it for five years now and about 20 a year, so it's about 100.

Jane: Is there a typical candidate for an exorcism?

Father LeBar: Well, basically the Devil could attack just about anybody. But it's usually a person who has somehow turned to evil, sin, bad way of life, things of that sort. Once in a while, the Devil wants somebody who is good to help take somebody else down.

Father LeBar: Well, it's not a question of whether I like it or not, that's what I've been asked to do by the late Cardinal O'Connor. But I do find it an uplifting in my faith all the time. Each time I do it I realize how beautiful the priesthood is and how strong the power of Jesus is.

Jane: There are a lot of people who might be skeptical of this. How do you differentiate between someone who is truly possessed by the devil and someone who may be seriously mental ill or have other problems?

Father LeBar: Well, of course today we have the added benefits of psychiatrists and psychologists and such so before we would agree to an exorcism, we would have a psychological evaluation, a medical checkup and a psychiatric evaluation as well. And if there is any problems in those areas, they need to be treated first before we go forth with an exorcism.

Jane: What are the signs of someone who, in your opinion, needs to be exorcised?

Father LeBar: Generally speaking, a person has a direct aversion to God or anything that is spiritual. Sometimes they will have moments where they speak in languages they never studied. Sometimes they have great strength. Once in a while, they even have clairvoyance, the ability to see something about to happen at a distance or something that just happened at a distance, and they have no way of knowing it any other way.
Jane: You have seen a large explosion of these exorcisms in the last few years. Why do you think that is?

Father LeBar: Part of the reason the numbers seem to have increased all of a sudden was for a number of years there weren't too many exorcists around. In the '70s, the numbers dwindled down and people weren't replaced. In the last few years with the charismatic people and the evangelicals "rousing up" the Devil here and there, there has been a great increase in the number of people seeking to be relieved of the devil that they may have had for 15 or 20 years in addition to people newly bothered.

Jane: Are exorcisms always successful? Do they always chase out the devil?

Father LeBar: Since exorcisms are a prayer of the church, by which we command in the name of Jesus the Devil to leave, they are ultimately always successful. Sometimes it takes a while. There are some cases that have gone on 20, 30 years before the person is finally delivered. No one can say why that happens, but it does.

Jane: Is the change immediate then?

Father LeBar: When a person is delivered from the Devil, you can see the change immediately. The stress, the difficulty in doing things disappears immediately.

Jane: I'll watch The Exorcist in a different way from now on.