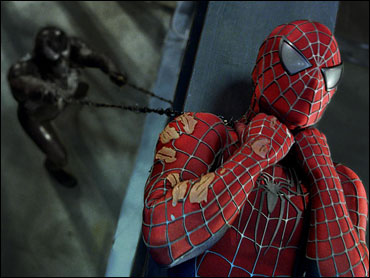 This has been a record breaking summer for the box office. Four summer movies made more than $300 million domestically, giving Hollywood it's first $4 billion summer.

"Spider-Man 3" made the most money with $336.5 million. People magazine assistant managing editor and Early Show contributor Jess Cagle said the box office was also boosted by solid hits like "Knocked up," "Ratatouille" and "Hairspray."

Sony's "Superbad," the comedy about three dorky high-schoolers trying to score booze for a party, was the No. 1 movie for a second straight weekend with $18 million in ticket sales, according to studio estimates Sunday. The movie raised its 10-day total to $68.6 million.

"Superbad" was on its way to $100 million, an unusual accomplishment for a movie with no big stars. It was another creation from Judd Apatow, who is considered the pope of American comedy, said Cagle.

"The thing that he does so well is he does these raunchy comedies that appeal to young males, which is what you need to do," he said. "There's a sweetness in them that also appeals to women. They're really expertly done. They're not just filthy. They're really, really smart."

"It just goes to show, you make them laugh, and they'll come," said Rory Bruer, head of distribution for Sony, which kicked off Hollywood's big summer with a record-breaking debut weekend of $151.1 million for "Spider-Man 3" in early May. "To start the summer with 'Spider-Man' and end it like this is an absolute blast."

Though business is slowing down as parents and students prepare for a new school year, Hollywood continued its summer hot streak. The top 12 movies took in $90.2 million, up 7 percent from the same weekend last year, when "Invincible" opened at No. 1 with $17 million.

Overall, Hollywood crossed the $4 billion mark for the summer season. The figure topped the $3.95 billion set in 2004, according to box office tracker Media By Numbers.

Movies will have grossed about $4.15 billion by the time the season ends on Labor Day, up 8 percent from last summer, estimated Paul Dergarabedian, president of Media By Numbers.

"Whether it be sequels, originals, comedies, action movies or whatever, this particular mix of films brought audiences in a record-breaking way," Dergarabedian said. "We still have to temper that with the fact that the number of tickets sold is nowhere near a record."

Factoring in higher admission prices, Media By Numbers estimated about 606 million movie tickets will have been sold this summer — a solid figure but only the sixth-best for modern Hollywood.

Other movies didn't do as well despite their star power. "Invasion" starring Nicole Kidman and Daniel Craig is an adaptation of "Invasion of the Body Snatchers," didn't do well because it took itself too seriously, Cagle said.

"You'll see 'Invasion of the Body Snatchers,' you want a nice, sci-fi thriller, this is very rhetorical and high-minded," he said. "It didn't work out."

"Evan Almighty," the sequel to "Bruce Almighty," also didn't fare well, even though it made more than $100 million. It cost more than $175 million to make, Cagle said.

"Only in Hollywood today can a movie make over $100 million and still be considered a huge disappointment," he said.