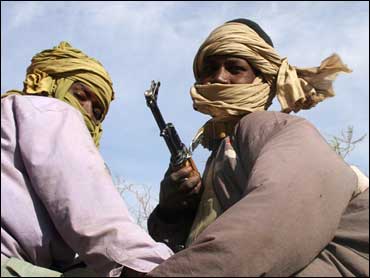 This column was written by Daniel Allott.


When will peace come to Darfur? After four years of genocide (the killings started in February 2003), that question has lost all but its rhetorical significance.

A consistent pattern has emerged in the world's negotiations with the Sudanese government over Darfur. The West (i.e., the United Nations, with backing from the United States) pressures Sudan to reign in its genocidal militias and allow peacekeepers to enter Darfur, while threatening economic and military repercussions for noncompliance. Bashir dawdles, fearing prosecution for war crimes by the International Criminal Court and spouting derisory theories about "Jewish conspiracies" and Western plots to re-colonize his oil-rich nation.

Then, with a deadline looming, the Sudanese government relents and promises to behave. Hope is restored. But Khartoum promptly ignores its promises, instead ramping up attacks against rebel groups and innocent civilians. In response, the West feigns outrage, using stark language to describe deteriorating conditions and the heavy price of continued obstinacy. In the end, however, without the will to follow through on its threats, the West gives in, and the cycle begins anew.

The cycle of impunity in Darfur began nearly three years ago, when the U.N. Security Council adopted resolution 1556, giving Khartoum 30 days to disarm or face economic and military sanctions. The deadline passed quietly.

Last May, following months of intense negotiations, Sudan signed the Darfur Peace Agreement authorizing the installation of U.N. peacekeepers. A Sudanese government spokesman said: "The United Nations is the only party that could help us, really, in implementing this peace agreement." Days later, Bashir reneged, announcing that the installation of U.N. troops "shall never take place."

Five months ago the U.N. Security Council threatened to impose sanctions on Sudan if it persisted in barring peacekeepers from Darfur, a threat punctuated by U.S. Secretary of State Condoleezza Rice, who declared that Sudan must "immediately and unconditionally" accept a U.N. force or face "a choice between cooperation and confrontation." Again, the deadline came and went.

In game theory economics a "non-credible threat" is a term used to describe a threat by a player in a sequential game that will not be carried out but is nonetheless made in the hope that it will be believed and, therefore, that the threatened undesirable action will not need to be carried out.

The United Nations has spent four years making non-credible threats against Sudan. Unfortunately for the U.N. — and most especially for the people of Darfur — the Sudanese government has taken none of these threats seriously.

This reality is not lost on United Nations Deputy Secretary General Mark Malloch Brown. Speaking candidly at a recent Brookings Institute event, Brown admitted that in Darfur: "...there is a little bit of bluff playing, in that we're saying to President Bashir of Sudan, 'give us consent for deployment or else.' And there's a lot of questions about what plausibly the 'or else' is. And President Bashir looks at us and he thinks he's seen us blink, and that makes it hugely difficult to credibly address this issue of winning his consent to our deployment."

President Bush, no stranger to feckless U.N. Security Council resolutions, has similarly stated that, "The credibility of the U.N. is at stake" in Darfur.

So, what can be done to break the cycle of impunity in Darfur? France — previously mum on Darfur because of its financial entanglements with the Bashir regime — has suggested entering Darfur without the United Nations. Susan Rice, an Africa specialist in the Clinton Administration, has urged the United States — with backing from European partners and, ideally, African governments — to employ a bombing campaign of strategic targets, such as airfields and command and control installations.

Max Boot, writing in the Jewish World Review, called for a private army (mercenaries) to quell the violence. Even the normally dovish New York Times has fantasized about NATO pushing its way in (as it did, successfully, in Kosovo) without permission from Khartoum. A NATO force is the most viable option, given that it already provides logistical help — including airlift support and officer training — to a beleaguered African Union force in Darfur, and because the NATO Response Force would be capable of deploying thousands of troops is less than 30 days.

Back at the United Nations, meanwhile, newly-elected Secretary General Ban Ki-Moon has pledged to make Darfur "a priority" during his tenure. Yet Ban — echoing the ambivalence of his predecessor, Kofi Annan — also argues that he sees "no military solution" to the conflict.

In the midst of such equivocation, only one thing seems clear: Unless the cycle of impunity is broken, the fifth year of genocide in Darfur will not be the last.
By Daniel Allott
©