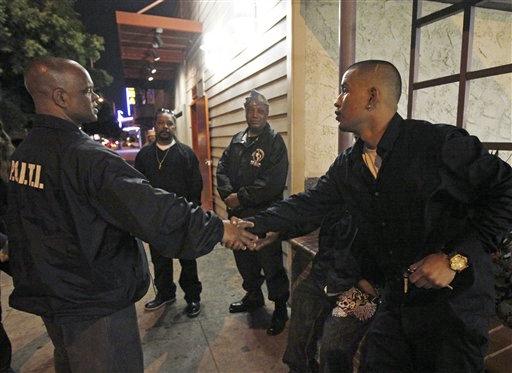 A judge ordered the immediate release of nearly 500 protesters Thursday - just hours before President Bush's speech at the Republican National Convention - and then fined the city for refusing to comply with his order.

State Supreme Court Justice John Cataldo fined the city $1,000 for every protester held past a 5 p.m. deadline that he had set for their release. It was unclear how many detainees were still in custody, but Cataldo had ordered the release of 470 people.

"These people have already been the victims of a process," state Supreme Court Justice John Cataldo told the city's top lawyer. "I can no longer accept your statement that you are trying to comply."

The detainees had been in custody for anywhere from 36 to 66 hours. The decision was immediately hailed by attorneys for the demonstrators.

"They have to release them right now," said veteran civil rights attorney Norman Siegel. "The judge, to his credit, said, 'Enough."'

At a later hearing, Cataldo determined the city failed to comply with his release order and imposed his sanctions. City Corporation Counsel Michael Cardozo tried in vain to convince the judge that the city was trying desperately to comply with his wishes.

"We can't just open the jails of the city of New York and let everybody out," Cardozo said. "We're not trying to flout your honor's order... We're doing everything humanly possible."

The city had blamed the sheer volume of detainees for the backlog in getting them released. More than 1,700 protesters have been arrested during the convention and the preceding few days - nearly 1,200 of them on Tuesday during a long-planned day of mass civil disobedience.

The judge's order came less than six hours before Bush was to accept his party's nomination for a second term in a speech at Madison Square Garden. Police were expecting protests coinciding with the speech.

About 50 of the detainees launched a hunger strike Thursday to protest their extended time behind bars while awaiting arraignment. They were turning down the sandwiches and milk served three times a day in central booking until everyone was freed.

On Thursday, New York commuters were greeted at Grand Central Station by about 100 demonstrators unfurling banners and releasing colorful balloons urging President Bush to do more in the fight against AIDS. There were 26 arrests.

United for Peace and Justice, the group that sponsored the huge pre-convention rally Sunday that drew more than 120,000 people and possibly many thousands more to Manhattan, planned an evening rally at Union Square. Sunday's protest was the largest ever at a U.S. political convention.

The number of arrests is large, too - about triple the number of people who were arrested at one of the most notoriously contentious political convention in American history - the 1968 Democratic convention in Chicago.

Unlike that historic event, violence was mostly absent as police and protesters eyed each other at demonstrations in and around the GOP gathering in New York.

Both demonstrators and police stalk each other with cameras in hopes of catching their prey in positions of misbehavior or abuse. The footage has turned up on television, and it could find its way into court.

"There's virtually nothing that's not recorded by somebody," said former 1960s radical Tom Hayden, best known for his defiance at the 1968 Democratic convention.

Street protests during this week's convention at Madison Square Garden were teeming with amateur and freelance videographers - some with crude, homemade press passes and low-end camcorders.

On public-access television, the Manhattan Neighborhood Network broadcast nightly reports based on protester video of demonstrations and the police response.

"We're our own media," said Soling Schwalbe, 48, of Los Angeles, as she taped interviews with fellow protesters at one event.

A guild official, Bruce Bentley, said the group has tape proving that police failed to give protesters proper warning before making scores of arrests Tuesday at a demonstration in lower Manhattan. The footage could help get disorderly conduct cases thrown out, or become evidence in a civil lawsuit against the city alleging civil rights abuses, he said.

As for the videos being shot by police, the NYPD insists the practice is well within legal guidelines for monitoring political activity. It denies allegations that crowd shots are used to compile databases of protesters.

But Bentley claims the cameras, in themselves, are stifling to protesters. "When people are trying to exercise their First Amendment rights, it has an intimidating effect," Bentley said.

Police Commissioner Raymond Kelly counters that protesters' cameras - which vastly outnumber those of police on the street - have been used to try to provoke rage. At one recent protest, a legal observer aimed a camera "about five inches from an officer's face," Kelly said. "She was continually taking his picture and, as I see it, harassing him."

Despite Kelly's complaints, police benefited from the work of an independent videographer this week after he filmed a demonstrator beating and stomping a plainclothes officer. The footage was turned over to investigators, who used it to produce a wanted poster of the missing assailant.

The 19-year-old suspect was spotted at a Union Square demonstration the next day and arrested on assault charges.