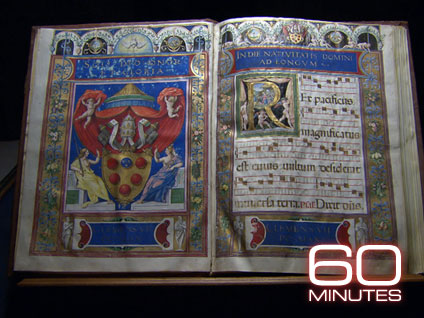 The Vatican Library is home to some of the oldest and most precious works of art and treasure known to man. Founded over five centuries ago as Europe was emerging from the Dark Ages, it holds manuscripts going back nearly 2,000 years. Morley Safer reports on this fascinating trove of artifacts and books that only the pope himself can borrow.

The following is a script of "The Library" which originally aired on April 10, 2011 and was rebroadcast on Dec. 25, 2011. Morley Safer is the correspondent. David Browning, producer.

We are about to visit a place few people have seen firsthand: the Vatican Library, a vast collection of historic treasures beyond compare. Founded over five centuries ago when Europe was coming out of the Dark Ages; a period of so-called humanism when the Catholic Church was open to new ideas in philosophy, science and the human spirit. It's the pope's library, but it contains much more than just church documents. As we reported in April, there are manuscripts going back nearly 2,000 years on music and math, warfare and exploration: even cookbooks and love letters. The library is closed to the public: a place for scholars only. But the Vatican agreed to let us in to see some of the priceless artifacts of our collective past.

Welcome to the 15th century. In Rome, turn a corner and you bump into antiquity. A delicious mixed salad of present and past. We arrived at the Vatican to find a medieval costume parade in progress. What better way to begin a trek through history.

And inside the library, the past surrounded us again, as we were shown the magnificent building and its riches.

Janz: This is the Urbino Bible...

For instance, this spectacular Bible, commissioned in 1476 by the Duke of Urbino.

Janz: ...who wanted to have a very fancy Bible.

Safer: There you go.

Janz: And this is what he got.

Library curator Timothy Janz tells us the Bible took years to make by hand: letter by letter, picture by picture.

It's just one of the library's 80,000 handwritten manuscripts from the ages before the printing press. Add to that: those two million or so printed books, Christian and pagan, sacred and profane, in virtually every language known to man. There are thousands of prints and drawings - windows on the past - and a huge collection of ancient coins.

This was the money of Palestine 2,000 years ago. Including the kind of silver coins Judas was said to have been paid to betray Christ. Here is a map of the world, drawn 50 years before Columbus: at its edge, the towers of paradise. And an immediate best seller, Columbus' description of his voyage to the new world, published in 1493.

Safer: In a certain way, the library is kind of the attic of Western civilization.

Father Michael Collins: It's so true. And it's like many attics, you know? You put things up all the time. You keep on pushing over boxes to make space for more things.

Father Michael Collins is an Irish priest who's written extensively about the Vatican. Where the library's shelves - if you put them end to end - would stretch for 31 miles.

Safer: Is there anyone, any single person who really knows what the library holds?

Collins: Nobody knows exactly what's there. Because it will be impossible for the human brain to understand, to remember the titles, who wrote it, when they were written.

Msgr. Cesare Pasini: It is quite a treasure of humanity that you have here.

Monsignor Cesare Pasini presides over the library. Its great hall - essentially unchanged over the centuries - is a picture gallery of antiquity. Saints, philosophers, and depictions of the great libraries of the pre-Christian world: Babylon. Athens. Alexandria. A shrine to learning and to books.

Safer: There's one person who can actually take a book out of the library, correct?

Pasini: Yes, the pope can have every book in the library.

If Saint Peter's Basilica represents the splendor of the church writ large - the library nearby is a testament to the monks and scribes who made magnificent miniatures in times past. Here, some devotional music commissioned by Pope Leo X. And the text of the Christmas Mass, used at the altar by Alexander VI. Both manuscripts five centuries old: written on parchment, treated animal skin.

Christopher Celenza: You will often see the skin of sheep being used, sometimes goats...

Christopher Celenza, director of the American Academy in Rome, is a scholar who's often used the library. He says that writing on parchment was not only tedious but expensive.

Celenza: If a monastery wanted to produce a Bible that perhaps had 400 pages it might cost you 400 sheep. It's an investment.

Safer: Beyond the academic work, did you ever just come here to hang out and flip through stuff, and see what you might discover?

Celenza: I think all of us have come here at one time or another with the hope of discovering something, having a general direction in which we're going, but not quite knowing where we'll wind up.

You might find, as curator Adalbert Roth showed us, drawings of a German jousting tournament in 1481.

Or an old cookbook, telling us that Roman foodies in the fourth century dined on chicken, veal, seafood, pancakes in milk and whipped pear cake.

Janz: How to hack away at your enemy's wall...

Or from an 11th century treatise on the art of war: a Byzantine soldier brandishing a flame-thrower, something the Greeks invented 1,500 years earlier.

Collins: The letters are certainly among the most bizarre and unusual that you'd expect to find in the pope's archives.

There are 17 of them. Handwritten by the king of England to the woman he would make the second of his six wives, and later have beheaded.

Henry signs his name with a heart, like a smitten schoolboy. He tells of his "fervents of love", his great loneliness without her. "Wishing myself," he says, "in my sweetheart's arms, whose pretty dukkys i trust shortly to kiss." Dukkys being a term in Henry's day for well, use your imagination.

Safer: What is that doing in the Vatican Library?

Collins: We don't know how they ended up here in the Vatican. It may be that some spy maybe one of my priestly predecessors may have stolen these letters and brought them to Rome to present in the case if a trial was made for Henry's request for a divorce.

But the church refused to let Henry divorce from Catherine of Aragon so he could marry Anne. He married her anyway, broke with Rome and took control of the church of England. The country was largely converted to the Protestant faith.

Celenza: This is one of the moments in the 16th century that leads to the fracturing of Christianity and to much of the bloodshed and the wars that, especially, the later 16th century was known for.

As man explored the planet, a scientific revolution was also underway. By the mid 17th century, navigators had mapped much of the world in remarkable detail.

Galileo turned his eyes and his telescope on the heavens. Here - from 1612 - are his drawings of sunspots. For his insistence that the sun is the center of the universe and the earth moves around it, the church branded him a heretic.

Collins: The pope at that time, Pope Urban VIII, was a very good friend of Galileo. Said to him 'Look, you know, I agree with you. You're right. But I can't approve of this because I'm the pope. And if I go against this it looks as if I'm going against the Bible. And I'm going to shake to the foundation the belief of the world, and the world's Christians, not just Catholics.

Just 380 years later - in 1992 - Pope John Paul II apologized for the Galileo affair. His successor Benedict XVI has sought middle ground in the centuries-old skirmishes between the church and science. In a recent sermon he said even the Big Bang Theory of the creation of the universe is not in conflict with faith because God's mind was behind it.

And backstage at the pope's library, science is brought to bear on crumbling books, as restoration workers deal with water damage, mold and the ravages of time.

Angela Gaetan and the others go inch-by-inch: patching and strengthening ancient pages. Scratching off paste put on by well-meaning restorers centuries ago - paste that's turning acid, eating away at the page. Mario Tiburzi seldom reads what he's repairing, it's too distracting. Especially if the writer happens to be Michelangelo.

Mario Tiburzi: When I work on the Michelangelo papers it was the same that I work on Mickey Mouse paper.

A difficult job may take months or even years. But consider the result.

Angela Nunez Gaetan: One thousand years after us, I hope that they can read the same thing that we are reading now.

The library's most valued documents go back almost 2,000 years, nearly to the time of Saint Peter - the first pope - whose tomb lies beneath the basilica that bears his name.

His letters to the faithful make up two books of the New Testament. And here is a copy - written in Greek on papyrus by one of Peter's disciples around the year 200, a mere century or so after his death.

Cesare Pasini: In the beginning was the word and the word was God.

And from the same period: the gospel of Luke and part of the Gospel of John, also written on papyrus. Venerated by early Christians in Egypt, preserved for centuries in a desert monastery.

Pasini: "The bread for today give us..."

They contain the oldest known copy of "The Lord's Prayer". So fragile we were only allowed to see replicas.

With our tour nearly over, it seemed as if the library's collection had come to life in the streets of the eternal city: the centurions and crusaders, the centuries of faith and folly, time present and time past. Leaving the library we thought: there's something, something almost magical to be immersed in this place, to breathe the air, and touch the hand of history.