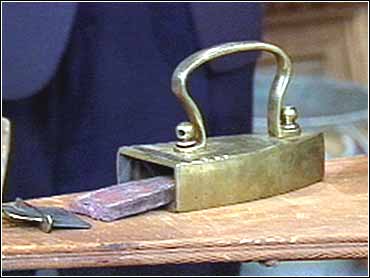 For hundreds of years people have been devising ways to get the wrinkles out of their clothes. And that quest for has yielded some valuable collectibles. The Saturday Early Show's Collectibles Expert Tony Hyman looks at antique irons.

Clothes irons have been around since the Middle Ages and come in a variety of materials. A Dutch model from the 1600s - made of glass - was designed to be used without heat to smooth damp clothes. Many of these have been dredged from Dutch canals - possibly discarded by their users to avoid the chore of ironing.

American collectors focus on thousands of different irons made in the United States over the last 200 years.

A hundred years ago, nearly every home in country had a flat iron, also called a sad iron. They were heated on stoves and in fires. The disadvantage of the sad irons is that their handles get hot. The most valuable to collectors are sad irons with unusual designs, especially figural shapes. Most fetch about $150.

Slug irons are heated by inserting a hot slug of metal into a cavity in the iron. These can be very valuable. A rare brass Austrian model complete with the original slugs, from 1800, is valued at about $1,500.

Charcoal irons are self-heating devices. Using them is like ironing with a miniature stove. Dirt and temperature regulations were problems but they are still widely used today in developing countries.

Liquid-fuel irons relied on gasoline, kerosene, alcohol and natural gas. These were a big improvement over the charcoal irons because they didn't produce soot.

Introduced more than 100 years ago, electric irons were safer, lighter and didn't need constant attention. Few homes had electricity, however, and the ones that did usually only had power at night. Eventually power companies turned on the juice one day a week so that people could use their electric appliances. Most of the early electric irons were mass produced and today can bring as much as several hundred dollars.

Interesting colors, shapes and designs garner interest from collectors. The original box and instructions add value as well - as is the case with other collectibles.