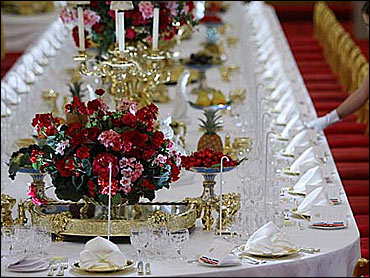 A state banquet at Buckingham Palace is more than just a meal - it's a glittering diplomatic performance reserved for heads of state and a few selected guests.

Queen Elizabeth first opened some of her royal apartments for viewing in 1993. Then in 2000, some of the gardens were opened.

Photos: A Glimpse Of A State Dinner

Today it's one of the grandest ballrooms inside Buckingham Palace that's open to public view.

It takes three weeks just to polish the silver. Then two thousand pieces of cutlery have to be laid, 170 napkins folded and the stemware - six glasses per person - placed just so.

Each 17-inch place setting is measured and then inspected by Queen Elizabeth herself.

"The seating plan is worked out by the Master of the Households Department, who are in charge of all the ceremonial stuff that goes on in the palace," said Jones, "but the queen has the final say in the seating plan."

The queen and her consort always lead the guests in to the meal which can be staged in Windsor Castle like the most recent banquet for President Nicholas Sarkozy of France.

But by far the majority - including the sumptuous affair to honor President Bush - take place at Buckingham Palace.

As for all those dishes? They're far too precious to throw in a dishwasher - every one of them is washed by hand.