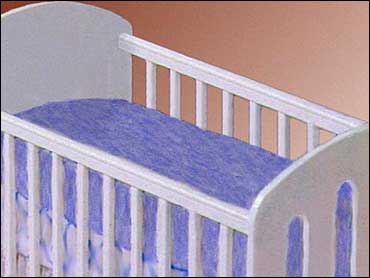 As every parent should know, having a baby involves plenty of preparation.

And creating a nursery is one of the big part of it.

On The Saturday Early Show Peg Moline, editor-in-chief of Fit Pregnancy magazine, gave some suggestions and trends for nurseries.

Moline says parents should move away from juvenile colors, incorporating pieces that can be used outside the nursery, and setting up space for baby in mom and dad's room for the first few months.

Parents have choices, says Moline. They can set up space in the adult room to include space for baby or use traditional nursery settings that incorporates pieces that can be used in other places. Both spaces can be painted in "grown-up" neutral colors and contain a place for baby to sleep, a changing station and other smaller items, such as a bottle warmer and baby monitor. The trend in paint is bright, clean and modern, not juvenile, says Moline.

Most parents bring their newborn into their bed to nurse or to sleep or both. In the past, however, parents hesitated to admit it because of a stigma against co-sleeping, says Moline. But more parents are not only talking freely about co-sleeping, they are making a permanent space for baby in their bedrooms.

But, Moline warns, parents don't want the baby to take over. She says sleeping with baby doesn't mean compromising your bedroom, because you also have to be comfortable.

Here are some items to consider for the nursery:

Arm's Reach Co-Sleeper: It's a bassinet with railings only on three sides. The fourth side butts right against mom and dad's bed. Moline says parents can roll over and comfort, feed and monitor a newborn without getting out of bed. Experts say this arrangement benefits parent and baby; and more studies are showing that newborns who sleep with adults are less likely to suffer SIDS.

Once baby begins rolling over, it's time to add a fourth side to the co-sleeper. The baby can then sleep in this bassinet until she outgrows it. The cost of the co-sleeper ranges from $180 to $300.

Hiccup Dresser/Changing Table: You don't have to buy a separate piece of furniture designed specifically for changing diapers, says Moline. Many parents choose to convert a standard dresser into a changing table instead. She says almost any dresser can be converted to a changing table by simply placing pads on the dresser that have a concave top and a sticky bottom. However, Moline warns, you have to stand attentive near the baby and hold him because the converted dresser has no railings.

Diaper Dekor: No changing space is complete without a diaper pail. Moline says those sold today have anti-smell technology. She says once you drop a diaper inside, you'll never smell it again. But you can continue to use your diaper pail after baby is out of diapers. Simply move it to the kitchen or the office and use as a trash can.

The First Years Night & Day Bottle Warmer: This device allows you to chill and then quickly warm a bottle without leaving the bedroom, says Moline.

Hiccup Wavy Crib: When shopping for a crib, safety comes first. If a friend or relative offers you their old crib, you probably shouldn't take it if it's over five years old because it won't meet the newest safety standards, says Moline. Make sure slats are no more than two inches apart, that the piece is quite sturdy and in no danger of tipping, and that the side doesn't slide down too easily.

Fisher Price Baby Monitor: If you do put baby to sleep in her own room, you'll want a monitor that allows you to hear when she wakes up. Versions of the monitor are sold with all kinds of bells and whistles, from television monitors to intercom systems. But all you really need is a basic $30 style that lets you hear what's happening in baby's room, says Moline.

Stokke Changing Table/Desk: This Swedish company makes three different pieces that they say "grow with your child." The changing table can become a play desk, a study desk, and finally, a bookshelf or entertainment center, says Moline. It costs ($399) a little more than the traditional changing table but it lasts for a long time. Moline likes this product because it's a little taller than most changing tables and you stand at baby's feet instead of at his side; both of these features mean less of the bending over that's hard on your back. (1-877-978-6553)

Tyndall Creek Rocking Chair: Finally, the rocking chair: Nursing moms will spend lots of time in a rocker so the chair must be comfy. Moline says mothers should avoid anything that's too narrow, and the arms shoulld be low so you can rest on them comfortably. (1-877-TYNDALL)