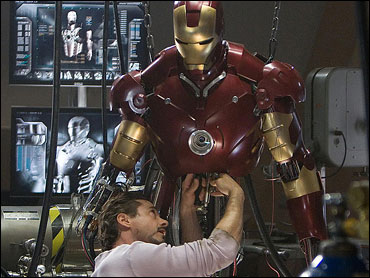 I went to the movies on Saturday night. Yes indeed, like a real American. I ordered my tickets online, arrived plenty early to get a decent seat, watched a hundred previews, and happily settled in with my popcorn and Diet Coke to watch "Iron Man" with Robert Downey Jr. and Gwyneth Paltrow.

It wasn't long after the picture began that a kid, toddler actually, started screaming. Not at the movie, I'm sure, just some sort of toddler inconvenience that most adults can't comprehend.

Soon the shushes started and the toddler kept screaming, and then there was shouting, "get em' out of here"… "shut the kid up." Would this end the violence? Suddenly the theater fell silent, Junior Mints to the rescue no doubt.

So I got to see "Iron Man" and it's as good as everyone says. Word to the guy with the toddler, though. Leave him home next time.
By Harry Smith