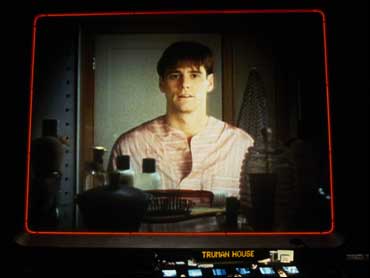 One man showed up at a federal building, asking for release from the reality show he was sure was being made of his life.

Another was convinced his every move was secretly being filmed for a TV contest. A third believed everything — the news, his psychiatrists, the drugs they prescribed — was part of a phony, stage-set world with him as the involuntary star, like the 1998 movie "The Truman Show."

Researchers have begun documenting what they dub the "Truman syndrome," a delusion afflicting people who are convinced that their lives are secretly playing out on a reality TV show. Scientists say the disorder underscores the influence pop culture can have on mental conditions.

"The question is really: Is this just a new twist on an old paranoid or grandiose delusion ... or is there sort of a perfect storm of the culture we're in, in which fame holds such high value?" said Dr. Joel Gold, a psychiatrist affiliated with New York's Bellevue Hospital.

Within a two-year period, Gold said he encountered five patients with delusions related to reality TV. Several of them specifically mentioned "The Truman Show."

Gold and his brother, a psychologist, started presenting their observations at medical schools in 2006. After word spread beyond medical circles this summer, they learned of about 50 more people with similar symptoms. The brothers are now working on a scholarly paper.

Meanwhile, researchers in London described a "Truman syndrome" patient in the British Journal of Psychiatry in August. The 26-year-old postman "had a sense the world was slightly unreal, as if he was the eponymous hero in the film," the researchers wrote.

The Oscar-nominated movie stars Jim Carrey as Truman Burbank. He leads a merrily uneventful life until he realizes his friends and family are actors, his seaside town is a TV soundstage and every moment of his life has been broadcast.

His struggle to sort out reality and illusion is heartwarming, but researchers say it's often horrifying for "Truman syndrome" patients.

A few take pride in their imagined celebrity, but many are deeply upset at what feels like an Orwellian invasion of privacy. The man profiled in the British journal was diagnosed with schizophrenia and is unable to work. One of Gold's patients planned to commit suicide if he couldn't leave his supposed reality show.

Delusions can be a symptom of various psychiatric illnesses, as well as neurological conditions such as Parkinson's and Alzheimer's diseases. Some drugs also can make people delusional.

It's not unusual for psychiatrists to see delusional patients who believe their relatives have been replaced by impostors or who think figures in their lives are taking on multiple disguises.

But "Truman" delusions are more sweeping, involving not just some associates but society at large, Gold said.

Delusions tend to be classified by broad categories, such as the belief that one is being persecuted, but research has shown culture and technology can also affect them. Several recent studies have chronicled delusions entwined with the Internet such as a patient in Austria who believed she had become a walking webcam.

Reality television may help such patients convince themselves their experiences are plausible, according to the Austrian woman's psychiatrists, writing in the journal Psychopathology in 2004.

Ian Gold, a philosophy and psychology professor at McGill University in Montreal who has researched the matter with his brother, suggests reality TV and the Web, with their ability to make strangers into intimates, may compound psychological pressure on people who have underlying problems dealing with others.

That's not to say reality shows make healthy people delusional, "but, at the very least, it seems possible to me that people who would become ill are becoming ill quicker or in a different way," Ian Gold said.

Other researchers aren't convinced, but still find the "Truman syndrome" an interesting example of the connection between culture and mental health.

Vaughan Bell, a psychologist who has researched Internet-related delusions, said one of his own former patients believed he was in the virtual-reality universe portrayed in the 1999 blockbuster "The Matrix."

"I don't think that popular culture causes delusions," said Bell, who is affiliated with King's College London and the Universidad de Antioquia in Medellin, Colombia. "But I do think that it is only possible to fully understand delusions and psychosis in light of our wider culture."