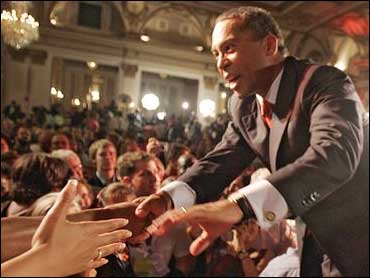 Barack Obama, whose recent campaign-style swing through Iowa has renewed talk of the freshman senator from Illinois as a presidential prospect, is still the frontrunner in discussions about who might be the first African-American to occupy the Oval Office.

But the voters of Massachusetts have given Obama some competition.

The landslide winner of Tuesday's voting in what was supposed to be a close contest for the Democratic gubernatorial nomination, Deval Patrick, is certainly not as well known as Obama. But if, as many expect, Patrick prevails in the November election, he will quickly find a place on the national stage. And if he proves to be as successful at governing the Bay State as he was as a law clerk for a law clerk for one of the nation's most progressive jurists, Judge Stephen Reinhardt of the U.S. Court of Appeals for the Ninth Circuit, as a top lawyer for the National Association for the Advancement of Colored People and as assistant attorney general for civil rights under President Clinton, Patrick will soon enjoy his share of presidential speculation.

Don't go looking for a rivalry between Obama and Patrick, however.

The two men, both products of challenging backgrounds who made it to Harvard Law School, have been friends for more than a decade.

Last year, when political observers discounted Patrick's prospects – the Boston Globe described him as "a political unknown" after he first discussed running – Obama endorsed the Massachusetts gubernatorial candidate. The senator hosted Patrick at a 2005 Congressional Black Caucus weekend in Washington and organized a major fund-raising event on his behalf in Chicago.

In June of this year, Obama returned to Boston — where he claimed his place on the national stage with an electrifying keynote address to the 2004 Democratic National Convention — to introduce Patrick at a rally before the June convention where the first-time candidate would secure the gubernatorial endorsement of the state Democratic party. Noting that Patrick was given little chance of winning when the two men began talking about the race in 2005, Obama told a cheering crowd of 3,000, "Now, lo and behold, one year later… this man who they said could not, in fact, can."

Patrick got off the best line of that night: "You know your campaign is on fire when Barack Obama is your warm-up act."

Patrick's campaign was on fire. Obama's endorsement certainly helped. But the real spark was Patrick's appeal to progressives — with his strong support for the marriage rights of lesbians and gays, his ardent opposition to the death penalty, his sympathy for the circumstance of immigrants and his backing of a minimum-wage hike and health care for all — as well as a highly-effective field operation run by veteran civil rights and social justice activists.

Patrick and his backers built a remarkable grassroots campaign that crossed lines or race, ethnicity, class and gender to unite Democrats in a blue state where divisions have repeatedly cost them the governorship. Like Obama in the Illinois Democratic Senate primary of 2004, Patrick emerged on the basis of a smart, aggressive campaign as the clear choice of party activists and, ultimately, of the voters.

On Tuesday night, Patrick was winning close to 50 percent of the Democratic primary vote, while the candidates who were once considered the frontrunners, Massachusetts Attorney General Thomas F. Reilly and wealthy businessman Christopher F. Gabrieli, who spent $10 million of his own money on the campaign, each collected about a quarter of the ballots.

Patrick still faces a serious contest in November with the Republican lieutenant governor of a state that has not elected a Democrat to its top job since Michael Dukakis in 1986 — and that, despite its liberal reputation, has never elected a woman or a person of color as governor. But the momentum's with Patrick and, if he wins, so, too, will be the talk about a place on a future national Democratic ticket.

Who knows? If the America that is evolves to the American that might be, maybe we'll see bumper stickers that read: "Obama-Patrick"?
By John Nichols
Reprinted with permission from the Nation

Why Proposition 8 Won In California

Poll: Do you have "fear of missing out"?
View CBS News In
CBS News App Open
Chrome Safari Continue
Be the first to know
Get browser notifications for breaking news, live events, and exclusive reporting.