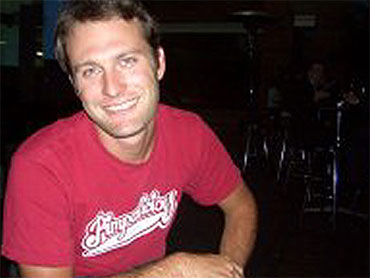 The dart led CBS News Correspondent Steve Hartman to Tennessee, where he met a woman who had an unconventional approach to college life after she decided to pursue a career that put her in touch with the great outdoors.

He stuck his finger in the phone book and it hit 1968. That's when 54-year-old Sherry Fritschi first met her husband, Ed. They played guitar at the same coffeehouse. Shortly after they formed a duet, and later, formed a duet.

But despite their classic '60s courtship, their marriage was pure 1950. Ed worked. Sherry had dinner waiting. Until one day, when Shelly was 34.

Shelly says, "It's as if something snapped inside me. I felt like I was wasting my life. I just didn't feel like a whole person, something was missing."

The feeling itself is not uncommon, but her solution certainly was. Instead of getting a part-time job or volunteering at the library, Sherry decided she wanted to be a national park ranger. This meant not just going to college, but going away to college.

Sherry recalls those days with a laugh, "I lived in a dorm."

Ed says, "She did really well; I mean they liked her a lot. They called her mom."

Meanwhile, Ed was left to fend for himself. He still remembers his first frozen pizza.

He says, "There were flames from the oven. I caught it on fire. And if that wasn't bad enough, I ate it."

Two fish have never been so out of water.

Sherry says, "I got a C+ in chainsaw class because I was too cautious. That's what the instructor said. And he had one arm."

A one-arm chain saw instructor - you don't forget something like that. And cameraman Les Rose and Hartman just looked at each other; they had heard about this instructor before. Five years earlier, they had profiled a woman named Lisa McLain.

Sherry says, "Lisa was one of my roommates!"

A joke? "No," Sherry says and calls Lisa on the phone. "Isn't this bizarre?" Sherry tells her. Bewildered Lisa answers, "And he picked you?" Sherry says, "Yeah, he's interviewing me."

Kevin Bacon, eat your heart out. Anyway, back to the story at hand, Sherry graduated from college and after half a dozen seasonal jobs - at the age of 49 - she became a fulltime ranger.

Sherry agrees, "I was so proud of that uniform, couldn't believe that I actually got to wear it. I feel like I'm representing the country."

"Shenandoah" is one of her a favorites.

Sherry says, "It's about people moving on, new frontiers, sort of like I've done with my life - new frontiers."

As for Ed, he retired, learned how to cook, and now has her dinner waiting. Thanks to the microwave, he doesn't even burn stuff - except his fingers - any more.

As he handles the hot plate, all he could say is, "Ouch, ouch, ouch…"