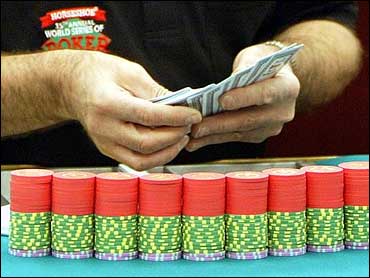 This report by Ken Adams is part of a series for CBSNews.com offering commentary on the world of poker.

I just returned from a long weekend at Foxwoods Casino in Connecticut, where the World Poker Tour has been underway for the past two weeks. I played in three events, as well as a multi-table satellite (to win a seat in the $10,000 championship event) and 15 single table satellites.

As a result the trip was not a financial success. But in a strange way I consider it to have been a victory, and it leaves me very optimistic for the rest of the year. Here's why:

As I indicated in my previous report from Atlantic City, I am intrigued by Erick Lindgren's new book (co-authored by my friend Matt Matros), "Making the Final Table." It explains why the young Internet players are doing so well against the older, more experienced tournament pros. It shows the power of their strategy, which is opposite in some ways from conventional "by the book" play.

My first efforts to integrate Lindgren's approach into my game in Atlantic City were confused and distressing. But by the third event at Foxwoods I felt like I was able to employ the best of both strategies.

If my primary objective was to finish "in the money" (the objective I had set for myself at the beginning of the year), the correct strategy was to fold everything but A-A or K-K, and wait for three more people to be eliminated.

However, the players who finished 13th through 20th would win less than $5,000. To win $10,000 or more you had to make the final table. The top three finishers would win $60,000, $110,000 and $204,000 respectively. The Lindgren/Mattros book rejects playing safe just to finish in the money, in favor of taking calculated risks (including the risk of busting out just out of the money) in an effort to accumulate enough chips to have a real shot at finishing first, second or third.

I had to decide whether to fold and play it safe, waiting to limp into the money before taking any risk, or move all in and try to get him to concede the $13,000 in the pot to me. I decided to move all in. Everyone else folded, and it was up to the initial raiser to decide whether to call my $30,000 raise. I did not think he would call for nearly a third of his stack unless he had A-A, K-K or maybe A-K. He thought long and hard before making a decision. Undoubtedly he was trying to decide what kind of hand I held, and whether he was a favorite or an underdog before the flop. In the end, he decided to call.

When he turned over 9-9 he was relieved to see that I had a smaller pair. If I had had a higher pair he would have been a big underdog, and if I had A-K, A-Q, or any two cards higher than 9, he was risking a third of his sizeable stack on a coin toss.

I did not get lucky, he won the pot, and I was eliminated in 22nd place. Within minutes, two other players were eliminated and the rest were in the money. The guy who beat my 7-7 eventually went on to the final table with the second highest number of chips. He ended up finishing 6th, winning $20,000. Had he laid down that hand, I am confident I would have finished in the money, and with a little luck I might well have made it into the top five.

So I am content with my performance overall, and am eager for July to arrive so I can test my new approach at the World Series. Until then I will work to improve it by playing small buy-in tournaments on the Internet.

Before I close, here are a few more details from Foxwoods for those of you who are interested in more details.