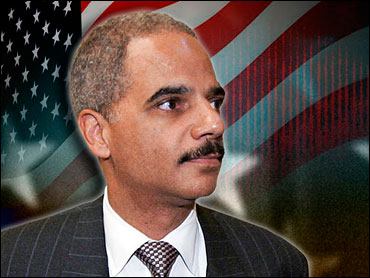 
Apart from the half-hearted efforts of perennial nooge Sen. Arlen Specter (R. Pa.), there is no great suspense surrounding the nomination of Eric Holder to be the 82nd Attorney General of the United States. He will be confirmed easily because he is a smart, capable and honest man who is significantly more qualified for the top job at the Justice Department than were his three immediate predecessors (John Ashcroft, Alberto Gonzales and Michael Mukasey).

But that doesn't mean that there won't be moments of mystery leading up to Holder's hearing before the Senate Judiciary Committee. Because the Republicans have chosen to use the Holder nomination as their token stand of defiance against the incoming administration, the hearing provides a concomitant opportunity for Holder to display to the nation and the world that the new boss at Justice won't be the same as the old bosses at Justice.

The mystery is not whether Committee Republicans have any legitimate ammunition to throw at Holder. They don't. As a public lawyer he made some controversial choices but never came close to showing any sort of a pattern of misconduct or even, necessarily, poor judgment. Marc Rich? Please. It's 2009. The Twin Towers are gone. And Bernie Madoff (and the guys at Lehman Bros and Freddie Mac and Fannie Mae) make Marc Rich look like a dime-store candy thief.

And as a private attorney, Holder's record is no more controversial. He made a lot of money, like a lot of other big-shot attorneys in Washington, and he represented clients that didn't necessarily always have the big picture at heart. So what? This is what many lucky and smart attorneys in the world have done. And trust me when I tell you that Patrick Fitzgerald, or even his Democratic replacement as U.S. Attorney for Illinois, can handle the prosecution of Illinois Gov. Rod Blagojevich without Holder's help.

No, the sole mystery Thursday is whether Holder will fearlessly seize his soapbox to be unusually candid with the Congress and the nation (imagine!) about how he views some of the major legal questions of our time. If Holder chooses this path, if he actually answers tough questions instead of dodging them, he will immediately transform the hearing into something far more significant than the kabuki dance to which we are all accustomed. He has the power, because of the attention, to turn his appearance into a clarion call for the incoming administration.

Holder can, with just a few moments of courage and honesty and integrity, turn the expected snooze-fest (need another crossword puzzle there, Sen. Coburn?) into a made-for-television make-good on his boss Barack Obama's campaign pledge to bring change and reform to Washington. He can on his first day in public in his new job prove what so many of us believe - that he really is better than grim and undistinguished men who preceded him.

For example, it's unreasonable and unsound to expect Holder to declare whether he thinks the Department ought to pursue torture charges against former Bush Administration officials. That's a question for another day. But the nation absolutely has a right to know whether its top law enforcement official believes that the "enhanced interrogation technique" of water boarding amounts to torture. Holder should answer that question fully even though Gonzales and Mukasey wouldn't and didn't.

Holder also ought to give the world a full and accurate preview of how the Obama Administration intends to view the matter of the rights of terror detainees. It it's true that next week President Obama will order the closure of the prison at Guantanamo Bay, Cuba, then what is the Justice Department expected to do to absorb some of the detainees there who will need to be prosecuted? And what will his federal prosecutors do to avoid the travesties upon justice that were the Moussaoui and Padilla cases? America no longer can afford show trials like those.

Meanwhile, a government brief is due February 20th in the matter of Ali al-Marri, a legal resident of the United States who has been held without charges here in the States as an "enemy combatant" for Al Qaeda since 2001. Following Supreme Court precedent in the Hamdi case, there is far less legal nuance here than Bush officials have wanted you to believe. Holder should say so, should declare that our government will not hold men for years without due process, and thus help end the debate over whether our government can and should resort to the very measures that prompted the Magna Carta and the Bill of Rights.

Holder also should have the courage to disclose whether and to what extent the Justice Department intends to more aggressively pursue the oil-and-sex-and-drugs scandal that roiled the Interior Department last year. He won't "jeopardize future litigation" if he pledges to put the full weight of the Department into ensuring that any possible charges that can be brought are indeed brought against the individuals responsible for such a fiasco. Holder can announce, in other words, that malfeasance in Washington will no longer be tolerated as it was during the last eight years of laissez-faire law enforcement.

How closely will the Democratic Administration look into past FBI mistakes and abuses in the area of national security surveillance? How is the Justice Department going to cope with the crime wave that is sure to follow our nation's economic downturn? What steps does Holder intend to take to restore the credibility and reliability and intelligence of a Department wracked by the U.S. Attorney scandal? How, in other words, does Holder intend to build upon the work started by Mukasey, the caretaker in charge now at Justice.

And what about the U.S. Attorney scandal, the repercussions of which are still vibrating around Washington? We learned just Tuesday, for example, about the atrocious behavior of Gonzales-appointee Bradley Schlozman, whom federal investigators concluded lied under oath before Congress when he testified about the scandal in 2007. It is as unsurprising as it is disappointing that the Bush Administration has chosen not to prosecute this guy for perjury. But why should the Obama Administration maintain this do-nothing approach to deplorable conduct? Isn't anyone going to pay for the destruction of the Justice Department from 2005-2007?

Holder is a cautious man, someone who knew many years ago that this day might come. And no one expects him to hand over the key to the castle or the secrets to the law enforcement universe. But on Thursday Holder can make his friends proud, and his adversaries meek, simply by talking more candidly to the American people than his predecessors have. He has the training, the experience, and the temperament to be one of the best attorneys general in our history. But only the truth before the Committee will set him free to accomplish that mark.
By Andrew Cohen