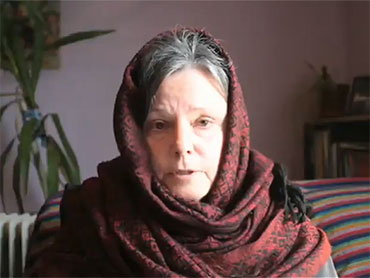 Wearing a headscarf, the mother of one of three American hikers jailed in Iran appealed Friday in a new video to the Islamic Republic's supreme leader to release her daughter and her friends for the holidays.

It's been almost five months since the three were taken captive in Iran for allegedly straying across the country's border and almost two months since their families have had any word on their condition.

Their jailing comes amid an increasingly bitter standoff between the U.S. and Iran over Tehran's disputed nuclear program.

Sarah Shourd, 31, along with Shane Bauer, 27, and Josh Fattal, 27 - all graduates of the University of California at Berkeley - had been trekking in Iraq's northern Kurdistan region when they accidentally crossed the border, according to their relatives.

"Sarah, Shane and Josh are good people," Nora Shourd of Oakland, Calif., said in the video posted on a Web site dedicated to freeing the three. "They meant no harm to the Islamic Republic of Iran, and have a deep respect for your ancient and noble civilization. If they entered Iran, it was an innocent mistake."

The families previously have pleaded for their release to Iranian President Mahmoud Ahmadinejad, but Friday's video was the first public outreach to Supreme Leader Ayatollah Ali Khamenei, who is Iran's highest-ranking political and religious authority.

"We're saying it's the holidays, please be compassionate and send them home," Shourd told The Associated Press.

On "The Early Show Saturday Edition," Nora Shourd told co-anchor Erica Hill, "We haven't gotten a response (from Iran to the video)yet, but we think it's a bit soon. The response has been mostly from this country so far. But we do hope that this kind of a plea will touch him and open up his heart enough to let our children come home for the holidays. It's really important to us."

The release of the video coincided with the start of Muharram, the first month of the Muslim calendar. The month is especially important for Shiites, who stage processions to mourn the seventh century death of the Prophet Muhammad's grandson - an event that led to the split in Islam between the Shiite and Sunni sects. Iran is predominantly Shiite.

Iran's foreign minister said Monday the three would be tried in court, though their mothers have not been able to confirm a pending trial. The minister did not say when the trial would begin or even what the Americans were charged with, other than that they had "suspicious aims." Last month, Iran's chief prosecutor said they were accused of spying.

The U.S. has no diplomatic relationship with Iran, and so far their families have held off on hiring a lawyer for their children out of hope they will be freed without a trial.

Since their capture, the only word on their condition came after two prison visits by Swiss diplomats, who represent U.S. interests in Iran. The last prison visit was at the end of October, with the diplomats reporting the three appeared healthy. Family members say the Swiss have requested more visits but have been denied.

"We're being stonewalled, and it's tough not to have any information," Nora Shourd said. "We can only fill in the blanks."

The hikers' mothers were on NBC's "Today" show Friday and said they were worried about their children.

"They've been described as physically OK, our concern is psychological and the loneliness that they must be feeling," said Shane Bauer's mother, Cindy Hickey.

The families have asked to call the hikers, but have not been allowed to do so.

"We're desperate for a phone call. We very, very much want it, which is not unusual to have a phone call between people who are detained and their parents," said Laura Fattal, whose son is Josh Fattal.

The U.S. and its allies have given Tehran until the end of the year to accept a U.N.-drafted plan under which Iran would send most of its low-enriched uranium abroad. Iran, which denies it intends to build a weapon, has countered with an alternate proposal to keep the material inside its territory - a scenario deemed unacceptable to the U.S.

Ahmadinejad noted last month that the United States was holding several Iranian citizens, raising concern that his government might be seeking to use the Americans in a deal.

Earlier this week, U.S. Secretary of State Hillary Rodham Clinton said the Iranian move to put the three on trial was "totally unfounded" and appealed anew to authorities to release the Americans.

Hadi Ghaemi, the spokesman for the New York-based International Campaign for Human Rights in Iran who has spoken with the families, has urged them to hire a lawyer in Iran. "With a lawyer there's that possibility they could get some information," he said.

But Ghaemi was quick to add that the families are in a complex situation with few easy calls.

"It's very difficult even for specialists like us, who do this work around the clock, to have a very good understanding of what is going on inside Iran," Ghaemi said. "I think they're doing their best, given the circumstances."