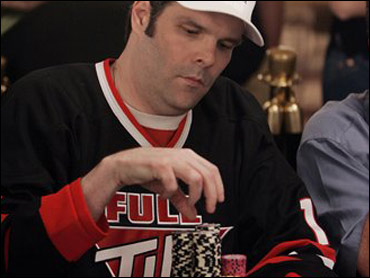 Total number of players who registered to play in the championship event turned out to be about 5,800 players. Last year there were 2,600, and the year before that 835, so the event continues to mushroom each year. Roughly a third of the total group started today at 11 a.m. At some point they said there were 1,861 of us playing today. Roughly the same number will start tomorrow, and the rest will start on Saturday. Then on Sunday all the survivors of Day One will come together to play Day Two. In short, I have two days off before I return to compete with the survivors from tomorrow and Saturday.

The plan was to play until we got down to 650 players today. It turned out to require 13 1/2 hours to get there, but we finally did at 2:30 a.m. They wrote down how many chips everyone had, and we all left for the night.

To give you an idea where I stand, this tournament is like the New York Marathon, where thousands of runners start out together and as the race wears on the field thins out until there are just a few in contention at the end. The championship event of the World Series of Poker lasts seven days (except this year, when Day One is spread over three days; each player will only play for a maximum of seven days, but it consumes ten days for that to happen).

At the end of Day One, roughly two thirds of the runners will have been eliminated from the race. The rest of us (roughly 1,950 players) will move on to the next stage. When Day Two begins, I will not be at the front of the pack. There will be players with a lot more chips than I have. But I won't be at the back either. I will be a little ahead of the middle, in perfectly good position to make a run for the finish if I can maintain the pace on Day Two. On Day Two, more than half the pack will fall by the wayside. The rest will move on to Day Three. To make it "into the money," I will have to survive to Day Four. And to make any real money, I will have to get to Day Six. So as excited and happy as I am to have survived the grueling first day of play, I recognize that I will need to do as well on Days Two and Three as I did today, to win any more than the hapless player who busted out first today.

After a good night's sleep, I will report on the details (probably more than you care to read, but that is how I organize the experience so I can review it and try to learn from my mistakes).

Now, to bed, exhausted but happy.