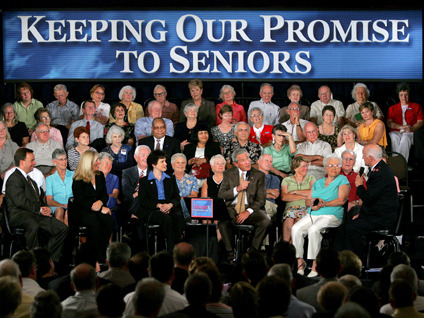 NEW ORLEANS (CBS) - Waiting at Xavier University for President Obama's speech marking the fifth anniversary of Hurricane Katrina's merciless assault on the Gulf Coast, I was thinking of this day in 2005.

Then-President Bush was leaving his Texas ranch on a two-day trip to spotlight the Medicare Prescription Drug program he pushed through Congress.

It wasn't immediately clear - even to the White House - on that Monday morning five years ago just how bad the situation was along the Gulf, especially in New Orleans.

Here are the raw notes from my daily presidential log of this week in 2005. (Grammar, spelling and abbreviations reflect that these are my notes, not copy meant for publication.) Key presidential quotes are in italics in most cases.

EL MIRAGE, AZ: Bush arrives Luke AFB and m/c to the RV Park to try to drum up interest among senior citizens for the Medicare Prescription Drug Plan that goes into effect in January. Urges seniors to fill out the forms required to qualify for the plan. Also uses his remarks to offer prayers and pledges of aid to those hard hit by Hurricane Katrina:

"I want the folks there on the gulf coast to know that the federal government is prepared to help you when the storm passes."

Bush also uses his speech to trumpet the draft Constitution in Iraq and stress US determination to see the mission through. Declares "I am very optimistic" about Iraq.

He also uses speech to offer assurances to border states that he shares their concern about border security and illegal immigration. Back to airport and AF-1 to:

RANCHO CUCAMONGA, CA: Arrives Ontario Intl Airport and m/c to holding room. Then to the James L Brulte Senior Center for another "conversation" on Medicare. Then back to airport and AF-1 to:

CORONADO, CA: After a morning conference call briefing on Katrina, Bush m/c to Naval Base Coronado for speech marking 60th Anniversary of VJ Day. Begins remarks with words of concern for Katrina victims.

"The federal state and local governments are working side by side to do all we can to help people get back on their feet. and we have got a lot of work to do."

Uses body of speech to draw parallels between WWII and the War on Terrorism.

"I made my decision: We'll stay on the offensive, stay with the people of Iraq. And we will prevail."

Sits for interview with Armed Forces Radio and TV and then visits with wounded military personnel at Naval Medical Center San Diego. Presents Purple Heart to one wounded navy corpsman. Also meets with doctors from the USN Hospital Ship Mercy to salute their service to victims from last year's tsunami.

Back to NAS North Island and AF-1 back to:

Arrives TSTC Waco and Marine One back to the ranch.

In the aftermath of Hurricane Katrina, Bush ends his ranch vacation two days early, departing about 1010am/CT by Marine One to TSTC Waco and boards

AF-1. On the way back to DC, AF-1 flies over New Orleans, Gulfport, Biloxi and Mobile, giving Mr. Bush an aerial view of some of the flooding and destruction. He spents 35 minutes looking out the left side of the aircraft.

Back at the White House, he meets with his task force on the hurricane response, and then in the rose garden, makes a statement vowing a massive relief operation.

Thu Sept. 1 WH. Bush has usual briefings. His schedule dominated by Katrina response including a 10a meeting with DefSec Rumsfeld and Gen Myers. Bush discusses the economic impact in a lunch meeting with Fed Chairman Alan Greenspan. Then discusses it with his economic team.

At 2p, Bush meets with his dad and former pres Clinton - who agreed to help raise private contributions for hurricane relief, as they did for the tsunami that struck Asia late last year.

Later in the day, WH announces Pres Bush is asking congress for a supplemental appropriation of $10.5 billion for hurricane relief including ½ billion for DOD.

Fri Sept. 2 WH. On the way to Marine One for a trip to the hurricane zone, Pres Bush makes a 9A statement to reporters in which he concedes that the results of the federal response so far "are not acceptable." But he believes the response itself has been good. But he also says:

"I want to assure the people of the affected areas and this country that we'll deploy the assets necessary to get the situation under control."

Further, he says, "we'll get on top of this situation. and we're gonna help people that need help."

Bush says: "my attitude is if it's not going exactly right we're gonna make it go exactly right. if there's problems, we're gonna address the problems. and that's what I've come down to assure people."

Boards Marine One for aerial tour of hard hit areas of Alabama and Missisippi, landing in:

BILOXI, MS: Bush boards m/c for ground tour of hurricane ravaged neighborhoods. On a debris strewn street, Bush encounters two sisters, sobbing about the loss of their home and belonging, the older woman looking for clothes for their son. Bush hugs them and offers comfort. Bush walks further down the street to a Salvation Army canteen truck to talk with aid givers and recipients.

During a chat with reporters, Bush says: "we're gonna clean all this mess up. the federal government is gonna - will spend money to clean it up."

He disputes assertions that the US military commitment in iraq hurt the disaster response along the gulf coast:

He is clearly awestruck by the level of devastation: "these are tough times. This is a storm the likes of which, you know, I pray I never see again."

Back to the airport and Marine One to:

NEW ORLEANS: Arrives Louis Armstrong Intl Airport in Kenner, LA., for meetings with Gov. Kathleen Blanco and Mayor Ray Nagin. Then boards Marine One for aerial tour of the flooding and destruction. Lands at Hammond Street Bridge to view work being done to repair 17th Street Levee that collapsed and allowed the flooding of the city. Offers attaboys to workers. The same to personnel at the nearby Coast Guard station. Then Marine One back to the airport and final statement of the day.

Says he knows people are suffering.

"I'm not going to forget what I've seen. I understand the devastation requires more than one days' attention. it's gonna require the attention of this country for a long period of time.

"This is one of the worst natural disasters we have faced with national consequences. and therefore there will be a national response.

Boards AF-1 for flight back to Andrews.

WH. With Rumsfeld, Myers and Chertoff at his side, Bush delivers his Saturday radio address live from the Rose Garden. He announces he's dispatching 7000 more active duty troops, army and marines, to the disaster zone.

Admitting that some victims are not getting the help they need, Bush vows to change that: "In America, we do not abandon our fellow citizens in their hour of need. And the federal government will do its part."

The following Monday, Pres Bush announced his nomination of John Roberts to succeed the late William Rehnquist as Chief Justice. Later in the day he returned to the Gulf Coast for another inspection tour. Over the next six weeks, Pres. Bush made 8 visits to the hurricane zone, trying to show he was responding to the initial mishandling of the disaster.

Is Louisiana ready for another hurricane?
More
Mark Knoller