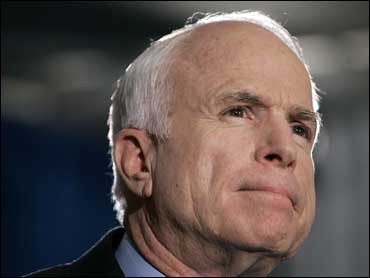 John McCain, seeking to become the oldest elected first-term president, gets an in-depth skin cancer check every few months because of a medical history his own dermatologist calls "remarkable" for its number of dangerous melanomas.

He now appears cancer-free, has a strong heart and is in generally good health, according to eight years of medical records McCain's presidential campaign made available Friday as it sought to prove that, at 71, he is healthy enough - and not too old - to serve as president.

"It was pretty remarkable to get that level of detail about a candidate," noted CBS News contributor Sanjay Gupta -- though, he added, there was "hardly any mention of his mental health" in the records.

It has been six years since his last episode of melanoma, the most dangerous form of skin cancer - and eight years since a melanoma invaded his skin deeply enough to scare his doctors. His dermatologist found no worrisome lesions during his most recent exam, less than two weeks ago.

"Senator McCain enjoys excellent health and displays extraordinary energy. And while it's impossible to predict any person's future health, I and my colleagues can find no medical reason or problems that would preclude Senator McCain of fulfilling all the duties and obligations of the president of the United States," Mayo Clinic internist Dr. John Eckstein, his longtime personal physician, told reporters in a conference call.

He added: "Age should not be a limiting factor in this day and age."

McCain has shrugged off questions about his age by highlighting his stamina and strong genes. His likely Democratic rival, Barack Obama, is 46, lean and agile, and a frequent basketball player who says he has quit smoking. Neither he nor Democratic opponent Hillary Rodham Clinton has released health records.

While melanoma may be McCain's personal foe, cardiovascular disease is the nation's leading killer, especially with age. And Eckstein pronounced McCain's heart strong - with no signs of blood-flow problems during an intense stress test - and his cholesterol and blood pressure, while not perfect, fine.

The doctor told the Associated Press in an interview: "I think physiologically he is considerably younger than his chronologic age based on his cardiovascular fitness."

Melanoma raises the biggest health concerns. McCain has had four separate spots of melanoma removed from his head and arm on three occasions - in 1993, 2000 and 2002. Three spots were very early stage, when they were in the uppermost skin surface and easily cut out.

But one, on his left temple in 2000, was invasive melanoma, what doctors call an "intermediate risk" melanoma because of its thickness - 2.2 millimeters. McCain required delicate surgery to remove and examine lymph nodes that showed no sign of spread.

"We don't have a crystal ball, but we have no way to say anything at the present time would preclude him from running for office," Dr. Suzanne Connolly, McCain's Mayo dermatologist, told the AP. In November 2004, she wrote that her patient's history was "remarkable for multiple melanomas."

The 10-year survival rate for that intermediate melanoma is 65 percent, said Dr. Stuart Lessin, director of the melanoma risk-assessment program at Philadelphia's Fox Chase Cancer Center. He was not involved in McCain's care.

"He's not cured," Lessin said. Still, the biggest risk of recurrence is in the first few years, so at eight years out, the chances of melanoma returning at that spot and killing McCain is "in the single digits," he added. "He's pretty much out of the woods."

But every bout of cancer increases the risk of another new cancer. Given McCain's fair skin and history of sunburns, he has a 5 percent to 8 percent chance of developing a fifth melanoma, Lessin calculated. Good checkups, however, mean any future melanoma should be caught in time to be treated successfully, he said.

McCain's most recent exams show a range of health issues common in aging: He had benign colon polyps removed during a routine colonoscopy in March, growths that are common with age and that sometimes turn cancerous unless taken out.

He takes medication to keep his cholesterol in check and just switched from the controversial Vytorin that made headlines this winter to a proven standby, simvastatin.

The Vietnam veteran has degenerative arthritis from war injuries that might mean a future joint replacement.

He's had kidney stones and in 2001 had his enlarged prostate reduced; it shows no sign of cancer, then or in his latest exam. And he was a two-pack-a-day smoker until quitting in 1980.

During his first presidential run, eight years ago, McCain disclosed hundreds of pages of records to reporters as he sought then to counter what aides called a "whisper campaign" questioning his mental fitness. In those records, medical personnel concluded that his years in prison, including solitary confinement, left him with no psychological wounds. Aides said McCain has had no mental evaluations in the past eight years.

This time, a small group of reporters reviewed 1,173 pages of medical documents that span 2000 to 2008 over several hours in a conference room at a resort just outside Phoenix and a few miles from the posh Mayo Clinic in Scottsdale, where McCain receives most of his medical care under a pseudonym - which reporters were asked not to disclose. Coincidentally, the release came the same week that McCain's close friend, Sen. Edward M. Kennedy, revealed that he had a cancerous brain tumor.

The documents include mundane personal details, such as the fact that he had earwax removed earlier this year and the dermatologist showed his wife, Cindy, how to monitor possibly suspicious skin spots hidden by his waistband. Though he's known as temperamental, the doctors made a point of repeatedly writing in the documents that he was "pleasant."

Also revealed: He has occasional momentary episodes of dizziness, when he gets up suddenly. McCain first told a doctor about them in 2000 - the visit that also uncovered the melanoma - and intense testing concluded they were harmless vertigo. He didn't report any episodes at his most recent exam.