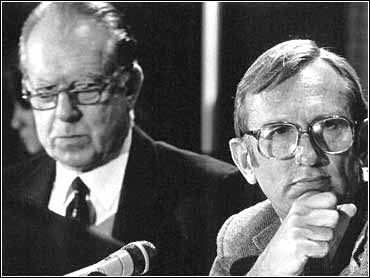 Jim Jeffords never was one to vote the Republican Party line. But the idea he might bolt the GOP entirely was never given much thought until after his decisive Senate vote last month against President Bush's $1.6 trillion tax cut over 10 years.

"I try to vote in Vermont's and the nation's best interest, rather than worry too much where the president or the parties stand," Jeffords said then.

That vote was just the most recent in a string of hundreds over Jeffords' 26 years in Congress in which he has broken with GOP leaders.

Not all of the votes came easy. Jeffords recalled feeling the weight of history and experiencing weeks of nightmares in 1999 during Clinton's impeachment trial.

"I was waking up at night screaming," he said. "I was that tense."

Jeffords' independence is in accord with a Vermont tradition pioneered by senators like Robert Stafford, George Aiken and Ralph Flanders.

All three were Republicans who were unafraid to vote against their party position and speak against the presidents of their own party. Stafford was a leading environmentalist in the Senate and Aiken was best known for his 1966 Vietnam peace plan — the United States should declare victory and get out. Flanders was the first Republican to denounce Sen. Joe McCarthy on the Senate floor over his accusations in the early 1950s that the government was infiltrated with communists.

But they all served at a time in which Vermont was the most Republican state in the nation. For a century — from the 1850s to the 1950s — the state elected no Democrats to state office. Times have changed and Vermont is now much more Democratic than Republican.

Easily re-elected last year, Jeffords is still the most conservative in the state's three-member congressional delegation: Vermont's other senator is Patrick Leahy, a Democrat, while the state's lone member of the House is Rep. Bernie Sanders, an independent who considers himself a socialist.

Education in general and special education in particular — the programs providing services to those with disabilities — have been Jeffords' passion since he first went to the House in 1975. Now chairman of the Senate committee that oversees all programs on health and education, he made more federal aid for special education his key demand in negotiations with the White House over Bush's tax cut.

Jeffords is a native Vermonter who takes seriously the state's tradition of independence. His father was a chief justice of the Supreme Court and Jeffords served as the state attorney general before he ran unsuccessfully for governor in 1972. He lost the Republican primary then to a candidate backed by the party elders.

In 1974, he wo election to the U.S. House; in 1988, he moved up to the Senate, winning his elections with strong support from Democrats and independents.

Congressional Quarterly listed Jeffords as the Republican most likely to support Clinton, a rating that Clinton noted at a White House function in 1998.

"I used to refer to Senator Jeffords as my favorite Republican and then I was informed that I had endangered his committee chairmanship — and his physical well-being," said Clinton. "So I never do that anymore."