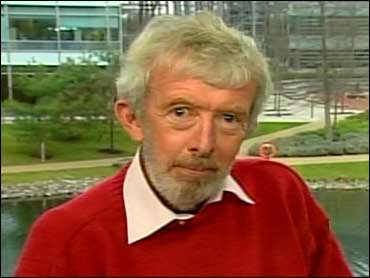 On the back of every one of our virtually worthless ten pound notes - that's maybe fifteen dollars in your money - is picture of a guy with a bushier beard than mine and a reputation that still lives on two hundred years after his birth.

Charles Darwin was a very famous English scientist with a big idea, arguably the most powerful idea ever. 150 years ago he published a book called the "Origin of the Species" - a rather dry, dull title for what was destined to become an overnight best seller.

Darwin suddenly turned conventional belief about how the world came into being on its head. Adam and Eve didn't get a look in. Darwin's theory was that man - like all other creatures - had evolved through something he called natural selection - the survival of the fittest. He based it all on evidence gathered in the Galapagos Islands in the Pacific Ocean studying fossils, animals and birds.

The brilliant simplicity of his theory took the scientific and religious worlds by storm. It was an explanation for life that no longer relied on direct input from a higher intelligent being. We weren't, according to Darwin, created by God at all. You can imagine the row that followed. In fact you don't have to imagine it.

There are thriving places like the Creation Centre, just west of Cincinnati airport, elaborately devoted to trying to convince us that Darwin got it totally wrong. Whereas here in the UK several hundred public transport buses can now be seen on the highways with great big billboards stuck on the side saying - "There's probably no god - so stop worrying about it and enjoy life". You see the controversy Darwin started goes on and on. Poor man - and to think his own early choice of career was to become a clergyman! No wonder it didn't work out - the rest as they say is history.
By Ed Boyle