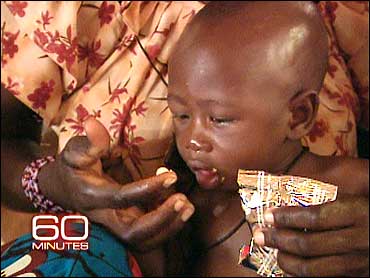 You've probably never heard a good news story about malnutrition, but you're about to. Every year, malnutrition kills five million children - that's one child every six seconds. But now, the Nobel Prize-winning relief group "Doctors Without Borders" says it finally has something that can save millions of these children.

It's cheap, easy to make, and even easier to use. What is this miraculous cure? As CNN's Anderson Cooper reports, it's a ready-to-eat, vitamin-enriched concoction called "Plumpynut," an unusual name for a food that may just be the most important advance ever to cure and prevent malnutrition.


"It's a revolution in nutritional affairs," says Dr. Milton Tectonidis, the chief nutritionist for Doctors Without Borders.

"Now we have something. It is like an essential medicine. In three weeks, we can cure a kid that is looked like they're half dead. We can cure them just like an antibiotic. It's just, boom! It's a spectacular response," Dr. Tectonidis says.

"It's the equivalent of penicillin, you're saying?" Cooper asks.

"For these kids, for sure," the doctor says.

No kids need it more than a group of children 60 Minutes saw in Niger, a desperately poor country in West Africa, where child malnutrition is so widespread that most mothers have watched at least one of their children die.

Why are so many kids dying? Because they can't get the milk, vitamins and minerals their young bodies need. Mothers in these villages can't produce enough milk themselves and can't afford to buy it. Even if they could, they can't store it -- there's no electricity, so no refrigeration. Powdered milk is useless because most villagers don't have clean water. Plumpynut was designed to overcome all these obstacles.

Plumpynut is a remarkably simple concoction: it is basically made of peanut butter, powdered milk, powdered sugar, and enriched with vitamins and minerals. It tastes like a peanut butter paste. It is very sweet, and because of that kids cannot get enough of it.

The formula was developed by a nutritionist. It doesn't need refrigeration, water, or cooking; mothers simply squeeze out the paste. Many children can even feed themselves. Each serving is the equivalent of a glass of milk and a multivitamin.

To see the impact it's having, 60 Minutes drove for 12 hours from Niger's capital to a remote village, where every week Doctors Without Borders hand out Plumpynut. After sleeping in a field under mosquito nets, Cooper and the team awoke at sunrise to find mothers emerging from the fields. Many had walked for hours in the dark, along treacherous paths, avoiding scorpions, spiders and poisonous snakes.

Rivers of women flowed into the site and within minutes there were more than a thousand of them, all waiting to get packets or tubs of Plumpynut. In a land where plastic bags are a luxury, they carry the food home in their scarves, their hands, or simply stacked on top of their heads.

Niger has become Plumpynut's proving ground. A daily dose costs about $1; small factories mix it here and in three other African countries. Tectonidis says other companies could make similar products wherever children need them.

"There's many countries in Africa now saying, 'We want a factory. We want a factory.' Well let's give it to them," he says. "We just have to focus on these areas. We don't have to feed the whole world. We have to go for the jugular. Where are they dying? Where are they wasted? That's where we have to intervene. If you feed them well until they're two or three years old it's won. They're healthy, they can get a healthy life. If you miss that window, it's finished."

In Niger, most children need help now during what's called the "hunger season," just before the new harvest. Old food supplies have run out and about all that's left is millet, a basic grain women pound for porridge. But millet doesn't have enough nutrients to keep kids alive; in America we use it as birdseed.

Normally a children's hospital 60 Minutes visited would have more patients than beds. But now, thanks to Plumpynut, it has empty beds. Dr. Susan Shepherd, a pediatrician from Butte, Mont., runs Doctors Without Borders in Niger.

She says children that would have been hospitalized in the past can now be treated at home. "The reason we can do that is because we can give children Plumpynut here in the ambulatory center, and they take a week's ration home. Moms treat their children at home and come back every week for a weight check," Dr. Shepherd explains.

That's what Sahia Ibrahim has been doing. She's already lost four children to malnutrition. Now her six-month-old twins, Hassana and Husseina, are malnourished and she's worried they might die too. So she's been coming to the hospital for Plumpynut.

Hassana, at six months old, weighs only seven pounds. While that's what a newborn should weigh, the little girl has put on a pound in just a week thanks to Plumpynut.

Children are weighed and measured at the distribution sites. They're also examined to make sure they don't have any serious infections. Malnutrition destroys a child's immune system, so they're more susceptible to diseases and less capable of recovering from them.

"Often these kids aren't even hungry. It's the opposite. They are anorexic because of the deficiencies they have. They lose their appetite," Tectonidis explains.

That's what happened to Mansour Miko and Maroufee Mazoo. Less than a year old, they had stopped eating and became listless and weak -- so weak that when their mothers brought them to get Plumpynut, the nurse put them in a van and sent them straight to the hospital. Three days later however, they were smacking their lips on Plumpynut, almost ready to go home.

"Have you seen kids who were on the brink of death brought back by Plumpynut?" Cooper asks.

But not always. Sometimes parents wait too long before bringing their child to doctors. 60 Minutes found Rashida Mahmadou in intensive care, barely clinging to life.

Rashida's condition was very serious. Her skin was literally peeling away -- one side effect of malnutrition, as skin becomes thin, pliable, cracks easily, and bacteria invade.

"She died of severe, acute malnutrition," says Shepherd, who says she sees this happening every day.

Asked how she deals with so many kids dying, Shepherd tells Cooper, "It breaks your heart. It can break your spirit. It can ruin your confidence in your ability to be a good doctor. And it is sad. And I carry memories of many, many children with me and I'll carry them with me for my entire life. But you certainly cannot indulge yourself in that kind of sadness. We need to do something about this."

If Plumpynut is the answer, how come kids are still dying?

"The answer is getting to kids earlier," Shepherd says. "Once children are as sick as she is, Plumpynut is not gonna save her."

Rashida was buried in a nearby cemetery, where the grave digger told 60 Minutes he is burying fewer children than he used to.

Two years ago this region had the highest malnutrition rate in Niger. But now, after widespread use of the Plumpynut, it has the lowest. Dr. Shepherd told Cooper they'll be able to treat more than 120,000 kids this year, up from just 10,000 children three years ago.

What about peanut allergies?

"We just don't see it," Shepherd says. "In developing countries food allergy is not nearly the problem that it is in industrialized countries.

It's hard to imagine a less industrialized country than Niger. On a list of 177 developing countries, the United Nations ranked Niger dead last -- least developed. More than 70 percent of the people don't know how to read. Most work in the fields and earn less than a dollar a day. Nomadic goat herders still roam this land -- their children and their kids travel by camel. Goats seem to be the main garbage disposal, but clearly the goats are falling behind. You can still spot a skinny guard dog, but we were told all the cats have been cooked.

In the countryside, where 85 percent of people live, girls start marrying as young as 11 years old. By the age of 15 most are wed, and by 16 most have already become mothers. The average woman here will give birth at least eight times in her lifetime. But largely because of malnutrition, one in five of their children will die before they reach the age of five. Of those who survive, half will have stunted growth and never reach full adult height.

But now, with Plumpynut, more children are surviving and thriving.

"And kids are doing better. Moms say their child's skin is brighter. Their appetites are better. And they're less sick. You know, what more could you ask for," Shepherd remarks.

Doctors Without Borders is asking for more of this type of food. Their success in Niger proves, they say, that fortified ready-to-eat products, like Plumpynut, save children's lives. Dr. Tectonidis says if the United States and the European Union were willing to spend part of their food aid on this, more companies will start making it.

"Even by taking a miniscule proportion of the global food aid budget, they will have a huge impact, huge impact!" Tectonidis says. "We're not even asking for billions. It will solve so much of the underlying useless death. So we gotta do that now."

"Wasted life. Just totally wasted life for nothing. Because they don't have this product, little a bit of peanut butter with vitamins," Tectonidis says. "What a waste."