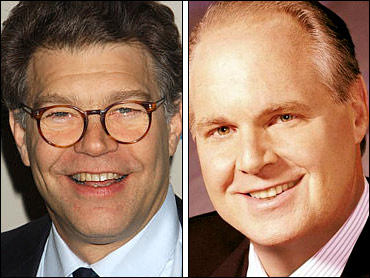 Remember Jim Hightower? We didn't think so. He was the former Texas state official who was, for a few minutes, the Left's great hope for a liberal talk-radio host to challenge the domination of Rush Limbaugh. It didn't work out. Neither did former New York governor Mario Cuomo, another failed radio talker. And neither did, most recently, Air America, the attempt to build an entire network of liberal talk.

Nothing has worked too successfully for liberal political talkers. Rush, Sean Hannity, and Laura Ingraham, among others, are as dominant as ever. The only thing that has changed is that liberals now seem less interested in challenging conservative talk radio in the marketplace than in strangling it with government regulation. And that presents a much greater threat than another misguided attempt to find the liberal Limbaugh.

A new blueprint for a government takedown of conservative talk radio comes from the liberal think tank Center for American Progress, founded and run by former Clinton White House chief of staff John Podesta. In a report entitled, "The Structural Imbalance of Political Talk Radio ," the Center outlines a plan that would, if implemented, do enormous damage not only to conservatives on talk radio, but to freedom of speech as well.

Surveying 257 stations owned by the top-five commercial station groups, the report's authors found the unsurprising news that 91 percent of total weekday talk programming is conservative, and just nine percent "progressive." Rather than attribute that imbalance to the generally conceded superiority of conservative programming — most radio professionals would tell you that Rush Limbaugh is simply better at what he does than any of the liberal opponents who have tried to compete with him — the report finds a deeper, more sinister case. "The gap between conservative and progressive talk radio," it concludes, "is the result of multiple structural problems in the U.S. regulatory system. " According to Podesta's Center, those structural problems can only be solved by government action.

The report proposes new national and local limits on the number of radio stations one company can own. For another, it recommends a de facto quota system to ensure that more women and minorities own radio stations. And finally, it says the government should "require commercial owners who fail to abide by enforceable public interest obligations to pay a fee to support public broadcasting."

The two-for-the-price-of-one attempt to have the government both stifle voices that don't meet "enforceable public interest obligations" while raising money for government broadcasting is certainly a worthwhile strategy for the Left. Not for free speech and free markets, however.

In addition, the report claims that the Fairness Doctrine — the government rule that, before it was repealed in 1987, required broadcasters to present opposing viewpoints on controversial public issues — might not really be dead, and thus might not have to be reestablished by Congress. Instead, a new administration might simply decide to enforce it again. That point is highly debatable, but it wouldn't be surprising if President Clinton, President Obama, or President Edwards were to give it a try.

The fact is, liberals simply haven't attracted talk-radio audiences. It's not their market. But since they still largely have Hollywood, academia, the New York Times, PBS, NPR, a network news division or two … they'll survive. And we on the Right will, too, if we keep the Center for American Progress's dangerously wrongheaded ideas off the table.
By the editors of National Review Online
Reprinted with permission from National Review Online