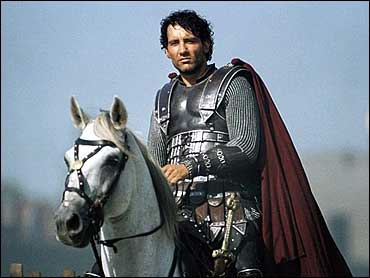 For centuries, the story of King Arthur has held a special place in folklore and legend. In the new movie, "King Arthur," British stage and screen actor Clive Owen plays the historic figure as the fall of the Roman empire gives birth to the British nation.

"For Arthur, the journey is a man who strongly believes in Rome," Owen explains to The Early Show co-anchor Hannah Storm. "He's half Roman, half British but feels much more in tune with his Roman side. Believes everything that Rome stands for, but it's changing and he discovers this through the movie, and with the help of Guinevere. She explains to him, 'You're a man of these people and can unite the chaos.' That's the journey of the character."

Although there was talk for quite a while that an Arthurian film was going to be made, Owen says he was very excited when the he actually had the script in hand and was offered the part. "I was thrilled, obviously," he says.

What he was not so thrilled about was having to ride a horse. He says, "I'd ridden a bit, not very well or successfully. I'd done a few movies and it hadn't gone well. Literally, the day the deal was done, I rang Jerry Bruckheimer's office and said, I'm on a horse tomorrow. That was probably two months before going."

And it was worth the effort, he says. "We ended up doing most of the stuff ourselves," Owen says. "Some of the horse stuff in there, you know, we're riding them at speeds into very dangerous environments: Smoke, fire, extras. And because both myself and the guys playing the knights put the work in, we were able to deliver most of it."

And to put in perspective the magnitude of the epic, he says, "You have to see the scale to appreciate it. They rebuilt Hadrian's Wall, that's a mile long. You have 700 extras dressed with fire, smoke, horses. When the battle was in full throttle, it had to be seen to be believed."

Asked about his career, Owen says, "I'm having a fantastic time, being offered lots of films and working with fantastic people."

As for him being the next 007, he says, "It's all rumor. It's all media speculation. I don't think about. All I know is that there are worse things to be associated with."