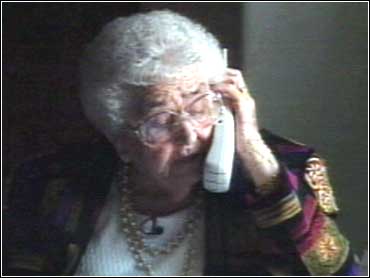 Every two weeks CBS News Correspondent Steve Hartman invites someone to throw a dart at a map of the United States, and wherever it lands is where he goes to get a story. This time he went to Seminole County, Okla.

He arrived on a Saturday night, and it was a good thing he did. If he arrived a day later, he might have missed his only chance to see Lula Morton.

Actually Morton leaves her house only on Sundays.

Eighty-six-year-old Morton calls upon every frail bone in her body, every swollen joint and at least one person in the parking lot to help deliver her there.

"As long as I've got breath, and I can put one foot in front of the other, I'll be at church!" she says.

Morton is the second oldest member of the Bowlegs Assembly of God Church. And not only does she faithfully attend, but when the service is over, she goes home and telephones every member who, for whatever sorry reason, didn't make it to church.

"I'm checking on the absentees, son," she tells those she phones.

This all comes naturally to Morton, who for 65 years was a preacher herself. Ordained at 15, she spent most of her adult life as a missionary. She worked on Indian reservations, where she touched a lot of lives, four very dearly.

"I have a real sincere love for every child that I have taken in," she notes.

But her devotion to children has also brought pain. Over the years Morton has adopted four native American children. Three were a joy, but the fourth one has been such a challenge, she says.

When asked if knowing what she knows now, would she do it all over again, she says, "No." Her son Tim adds he wouldn't blame her.

Morton's son Tim is an alcoholic. He lost his driver's license six years ago and has been in jail several times for other alcohol-related offenses. And yet the police don't even know about much of what he's done. Over the past few years, Tim has stolen cars appliances, jewelry and cash from his mother.

"But it wasn't done to necessarily hurt her. This was done to support my own alcoholism," he explains.

Morton's confidant through all of this has been Pastor Roy Robertson.

"Oh, we've cried lots of tears over it," the pastor says.

His advice was tough love; he suggested she press charges "to leave him there for a while," he says. "Let him think abut what he's done. You can still love him, and yet correct him some."

But she didn't, he says.

"Because I love him," she says.

So every week she prays for God's intervention. Morton has always said if Tim would just do the same, he'd get better.

And that may be the kernel of hope here. Apparently for the first time in years, Tim was in church one recent Sunday. And to Morton, that qualifies as a sign from God.