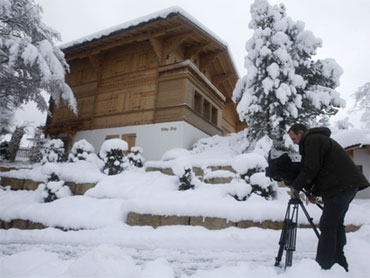 In the final day of "Week of Wishes," The Early Show introduces a couple who counts its blessings every day. But now, the count is higher than the two ever dreamed.

When high school sweethearts Penny and Dwain Dyer got married in 1997, it was perfect. But when Penny got pregnant a few years later, it was perfectly awful.

So sick, in fact, that she actually lost weight: more than 25 pounds.

Something about this pregnancy was different, really different.

He was wrong. The next sonogram showed that Penny was carrying quadruplets. She was terrified.

Penny says, "It was very difficult to deal with having quads."

There was good reason for fear: doctors told her that trying to carry all four to term could endanger the babies' lives and Penny's. One of the options presented to her was selective reduction - that is, to remove two of the babies in order that the other two might have a better chance of survival. Penny decided that it was going to be all or nothing. For family members, the situation was agonizing."

Lila Dyer says, "You can't describe that. I think about it, I'll start crying. I feared for Penny's life. But she's amazing."

On March 21, 2002, Penny Dyer gave birth to four babies: Bailey, Peyton, Brooks and Jessica - 10 weeks early. In multiple births, some babies have birth defects. But the Dyer children were perfect. As preemies, they were smaller than average, but they were all beautiful, all healthy, and within a month, they were all home.

Even on the best days, keeping four babies fed, changed and entertained is a challenge. Penny and Dwain have some help, but still, It is not easy.

As a group, they consume juice by the gallon, eggs by the dozen, and diapers by the case.

Right now, all four cribs are crammed into one small room. The Dyers live in a rented mobile home at the end of a long dirt road that turns into mud when it rains. They hope to find a bigger place one day. But right now, that day is just a mother's wish.

Lila Dyer says, "Her only wish is to have a home with a nice yard and a space for the children to play. If there's any way to help make this wish come true for my children and grandchildren, I would be overjoyed."

True, the family could really use more space, but even with all the challenges of raising quads, no one's complaining.

Penny says, "If I had it to do over, I would do it because they're the best children in the whole world and I love them to death and there's nothing like it. But I'll never be pregnant again, that's for sure. That's for sure."

At The Early Show studio, the Dyers - Penny and Dwain, and babies Bailey, Peyton, Brooks and Jessica - were accompanied by Lila Dyer, who wrote to the Week of Wishes in the first place, and the maternal grandmother, Janet Zoda.

Co-anchor Rene Syler tells them The Early Show will not be able to grant the wish, but others will. Debbie Lightsey, commissioner of the City of Tallahassee, showed up holding a mock-up of grass, representing land.

She says, "It's going to be a little bigger than this! It will accommodate a new house."

And then Kelly McCloskey, CEO of Wood Promotion Network, adds, "Congratulations on your four children. I, too, have four children, although, I didn't have them all at the same time. But I do know what a challenge it is and how important it is to have a house and a house that grows with your changing needs. So we at the Wood Promotion are pleased to help you build that dream home."

Showing a picture of what the Dyers' home will look like, McCloskey says, "It will be a solid wood home and it will be durable and beautiful and it will be able to change with your growing needs."

In complete shock, Penny says, "Oh, goodness. I'm just - I just can't even describe it. It's insane! I thought I was coming here for healthy baby day!"

Happy, Lila Dyer says, "Awesome. It's going to be great to have them see their own place and a big yard to play in."